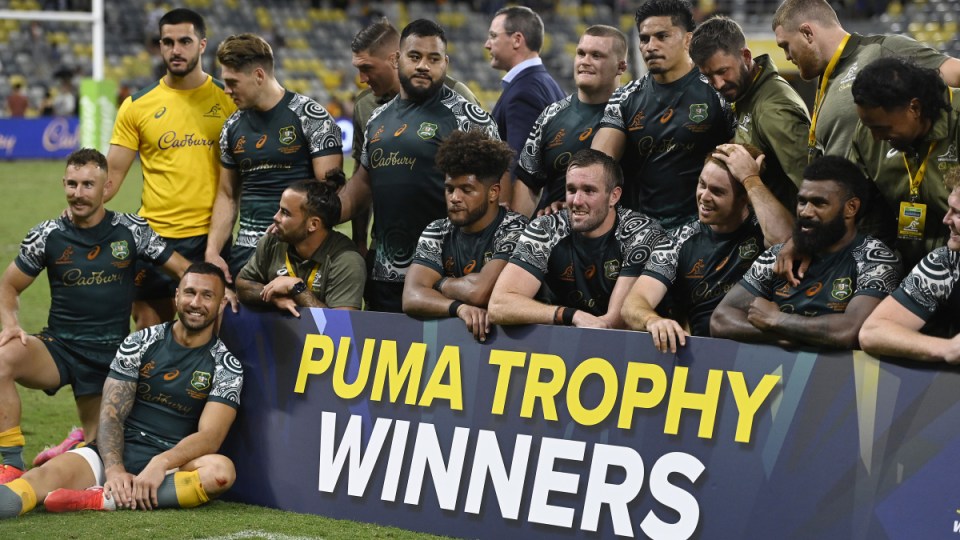 The Wallabies have notched three-straight wins for the first time since 2017, beating a plucky Argentina 27-8 as James O’Connor made a successful Test return in Townsville.

Samu Kerevi’s powerful running set the scene for the Wallabies, the centre setting up and scoring a try to create a 17-3 halftime buffer.

Australia lost their rhythm though and the Pumas fired up, three missed kicks costing them as they otherwise won the early exchanges of the second half.

But O’Connor’s arrival after 56 minutes – his first game since May because of neck and groin injuries –- alongside halfback Tate McDermott seemed to refocus the Wallabies.

Replacing Quade Cooper at five-eighth after another understated performance, O’Connor kicked a settling penalty then laid on a try for in-form winger Andrew Kellaway to seal the result.

The victory followed back-to-back Rugby Championship wins over South Africa, with Dave Rennie’s side to play Argentina again on the Gold Coast next Saturday before departing for a tour of Japan and Europe.

Not since winning four straight in 2017 have they enjoyed such a charmed run.

“We’re rapt to win again. It wasn’t with the polish we wanted and I thought we left a lot of opportunities on the park, especially in the second half … just had to give the ball to the guy next to you,” Rennie said.

“We went really hard first half. I thought that should have paved the way to run them off their feet but they are tenacious, they hang in there and scramble really well.”

Kerevi’s line-busting form alongside emerging No.13 Len Ikitau was a highlight, as was Kellaway’s form on the wing and Reece Hodge’s effort at fullback.

Hodge dummied and strongly skipped through two tackles for the game’s first try, kicking and running confidently in general play as he made his case to retain the starting spot after Tom Banks’ broken arm last week.

Hodge was substituted in the closing stages, with Kellaway shifting to fullback and Jordan Petaia earning minutes on the wing.

The 23,184-strong crowd, which had earlier watched the All Blacks sneak past South Africa to secure the Rugby Championship title, enjoyed another strong shift from prop Taniela Tupou.

But his replacement Tom Robertson, as well as lock Darcy Swain, also made an impact to arrest any Argentina momentum in the final quarter.

Skipper Julian Montoya scored for Argentina off the back of a maul to open the second half but a yellow card to Marcos Kremer for tripping Hodge hurt their hopes just before O’Connor’s arrival.

Rennie said star winger Marika Koroibete would leave the squad ahead of their final Rugby Championship game, opening the possibility for Petaia to start on the flank.

The coach also hinted that barnstorming backrower Sean McMahon was also in line to play his first Test since 2017, the Japan-based talent going unselected since joining the squad three games ago.