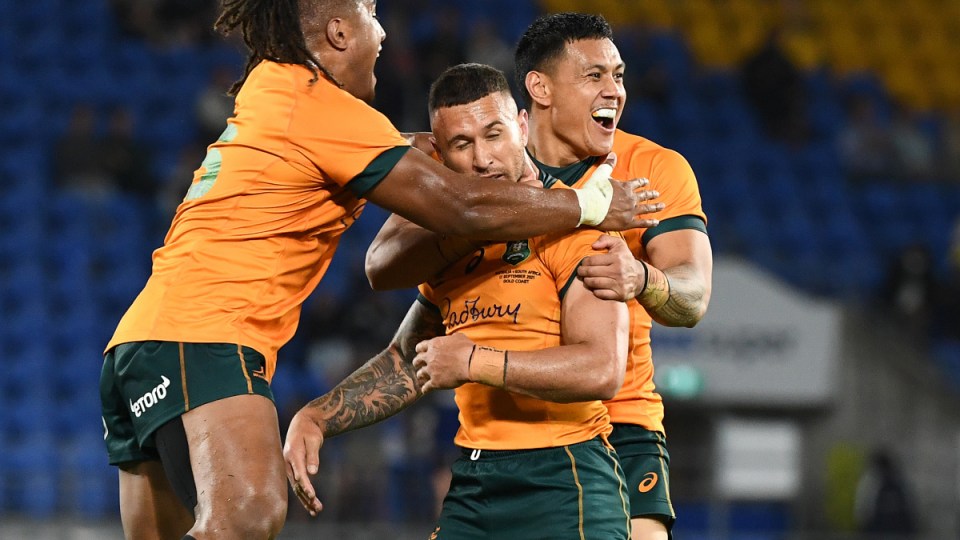 Cooper (centre) is congratulated for his match-winning kick on Sunday. Photo: AAP

Returning to the Test fold for the first time in more than four years on Sunday, Cooper slotted a perfect eight-of-eight kicks including a long-range effort after the siren to beat South Africa 28-26.

His efforts only fuelled the public interest around the New Zealand-born Cooper’s pursuit of Australian citizenship after he revealed in July he’d been knocked back four times.

“Awkward moment [when the] Australian government refuses your citizenship applications (again),” he wrote on Twitter at the time.

“Wearing the green and gold 70 times apparently is not enough these days.”

Before last Sunday, Cooper had played 70 Tests for the Wallabies.

On cue on Tuesday, Immigration Minister Alex Hawke announced increased flexibility to “streamline the pathway to citizenship for some of our most talented prospective Australians”.

“The unique work and travel demands on some of our most highly distinguished prospective Australians should not preclude them from making the cut,” Mr Hawke said.

“That’s why I have directed the Department of Home Affairs to apply greater flexibility in applying the residence requirement for eligible people.

“Exceptional people must not be prevented from becoming Australians because of the unique demands of the very work they do that makes them exceptional,” he said.

Cooper moved to Australia as a 13-year-old, winning a Super Rugby title and playing more than 100 games in 11 years for the Queensland Reds.

He played a season with the Melbourne Rebels before moving to Japan, where his long-term occupation had been a hurdle to previous requests.

“I have to give my thanks to [Labor senator] Kristina Keneally and her office for going into bat for me and the Australian public, who put a lot of pressure, and the media, on the government to take a look at not only my case [but others in a similar position],” Cooper said on Tuesday.

“It’s not over the line, but great to see the rule has been amended to make it a little easier for us.

“There would be countless others who’ve seen the news today and seen that little glimmer of hope.”