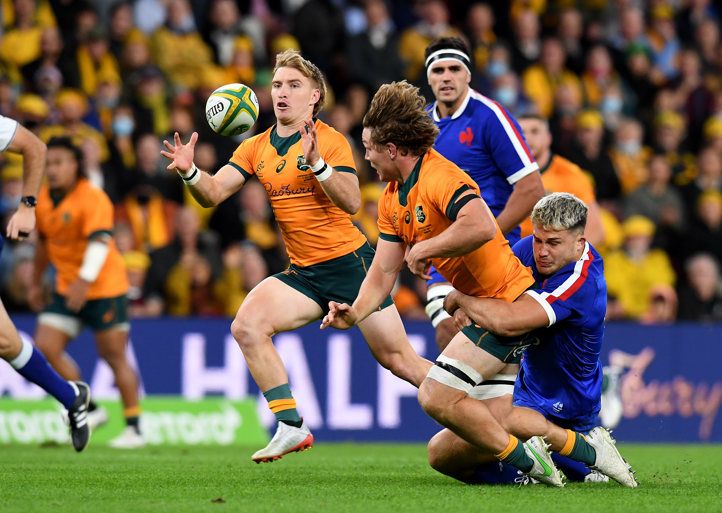 Tate McDermott of the Wallabies receives a pass from Michael Hooper before scoring a try during the third Rugby Union Test between Australia and France. Photo: AAP/Dan Peled

The Wallabies have clinched a famous win over France, playing one man down for 75 minutes to beat Les Bleus 33-30 and claim their Test rugby series 2-1.

The 34,164-strong Suncorp Stadium crowd were livid when in-form winger Marika Koroibete was red-carded in the fifth minute for a tackle on French captain Anthony Jelonch in Brisbane.

Referee Ben O’Keeffe and his assistants deliberated for minutes before determining Koroibete had raced in from a distance and contacted him high without any mitigating factors.

The French raced ahead 10-0 but the Wallabies were stoic, fighting back to lead, before Noah Lolesio kicked the hosts clear with 90 seconds to play.

The win was Australia’s ninth-straight at the stadium dating back to 2016 and capped a tight series that had featured two-point wins to both sides in a three-match contest squeezed inside 11 days.

“I thought he got sucked into it. .. I thought it was a great tackle, a great shot,” the former Wallabies centre said.

Australia had already lost their other winger, Filipo Daugunu, who injured his arm in a tackle inside the first 90 seconds of his Test return.

French halfback Baptiste Couilloud then ran over his opposite number Tate McDermott for the game’s first try, more cries coming from the crowd when replays showed he led with a high arm to push over.

McDermott had the immediate reply though, racing to link up with Hooper after Noah Lolesio had put the captain through a hole.

A Lolesio intercept try put the Wallabies ahead before a string of unforced errors allowed Cameron Woki to peg one back as the sides went to the break locked up at 20-20.

Pierre-Louis Barassi finished a 90-metre play for a terrific French try but prop Taniela Tupou’s arrival after 46 minutes paid off when he barged over.

They traded penalties after that, both teams missing one each as well, before Lolesio nailed the match-winner.

France had one last crack with a penalty on halfway, but Darcy Swain forced the turn-over after the visitors opted to kick for touch and go for the try.