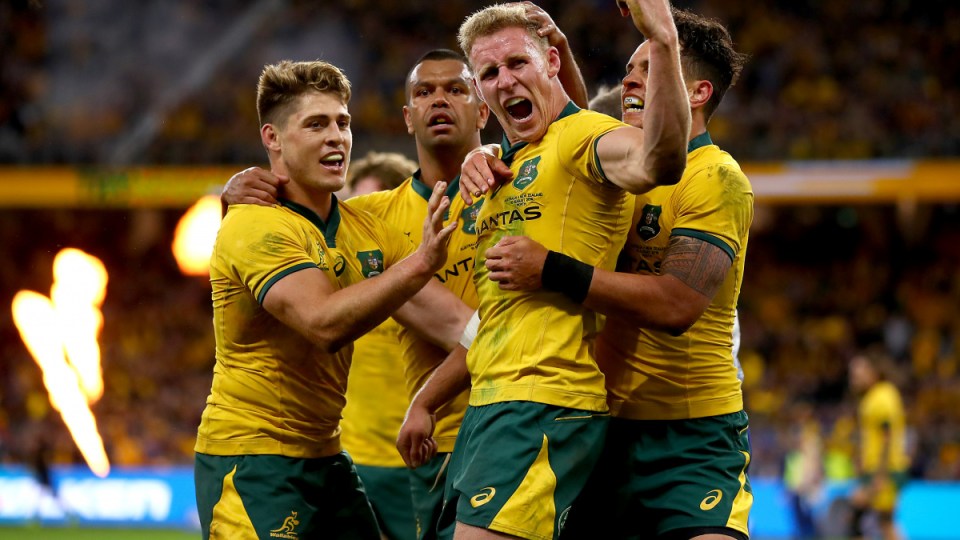 Reece Hodge is returning to the scene of his greatest rugby triumph and ready to step in again as playmaker at Suncorp Stadium when the Wallabies host France on Wednesday.

Hodge guided Australia to a 24-22 upset win against the All Blacks at the Brisbane venue last year in just his second Test start at five-eighth.

With 45 Tests to his name playing in various positions, the versatile Hodge is looming as the most experienced backline player available for the first Test amid injuries to key veterans.

Halfback Nic White (knee) has already been ruled out while five-eighth James O’Connor (groin) and inside centre Matt Toomua (neck) aren’t expected to be available until the second Test in Melbourne on July 13.

That loss of experience may see coach Dave Rennie opt for the reliable Hodge, a big, strong ball-runner and defender with a big boot, over Brumbies youngster Noah Lolesio at No.10 despite the Melbourne Rebels playmaker himself being sidelined with a knee injury since early April.

Lolesio said on Sunday who wore the No.10 remained the “million dollar question” but he had matured his game since a forgettable debut against the All Blacks last year.

The Wallabies are keeping tight-lipped about their halves combination and whether O’Connor will play but Hodge was more definitive.

“Definitely, but I’ve got no expectations – I’m extremely grateful to have been selected in the squad after missing the last couple of months of Super Rugby,” Hodge said.

“The guys who have been in form in Super Rugby should be the one in the box seat in terms of selection but the ability to push your case through training is exciting,” he said.

“Me, Noah, Tate (McDermott), Ryan Lonergan and Jake (Gordon) who is coming back in from injury, we’re all pushing for a couple of spots in the halves until Rabbs (O’Connor) is 100 per cent fit.”

Winger Marika Koroibete (34 Tests) and fullback Tom Banks (11) are the only other players in double figures for Test caps but Hodge backed a raw backline to be up to the challenge.

“They’ve still got to select the team but having Whitey, Pup (Toomua) and Rabbs (O’Connor) not available for the first match is a big hit in terms of experience,” he said.

“But the guys who are fit have shown that they’re more than capable of matching it at Super Rugby Trans-Tasman level and while a few of the guys in the backline have only played a handful of Tests they look right at home.

“The whole squad is pretty excited about what our backline can potentially do in stringing some consistent performances together off the back of some go-forward ball off an exciting forward pack.”

Tickets are back on sale for the clash after Saturday’s announcement that the COVID-19 lockdown would be lifted.