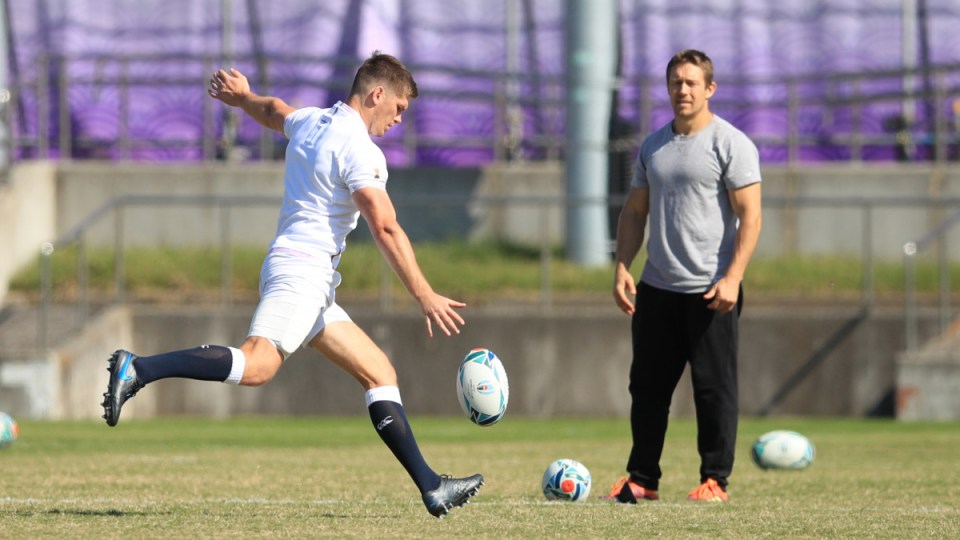 England has invoked the memories of glories past with 2003 Wallabies’ nemesis Jonny Wilkinson offering drop-goal guidance to Owen Farrell ahead of Saturday’s World Cup final against South Africa.

Wilkinson was present for the week’s last training session at Tokyo’s Fuchu Asahi Football Park on the eve of the Springboks clash at International Stadium Yokohama.

He watched and gave advice as Farrell and Ben Youngs practised drop-goals in expectation of a tight encounter between the sport’s top-two ranked teams.

Wilkinson famously struck the extra-time drop goal that clinched a 20-17 victory over Australia in the 2003 final – the nation’s only World Cup triumph – and also started the global showpiece four years later.

The 40-year-old works with Eddie Jones’ squad on an consultancy basis, offering his technical expertise on kicking to Farrell, Ford, Youngs and full-back Elliot Daly.

It is believed that this is the first time he has been involved in an England training session in Japan and his wisdom has come as the clock ticks down on a seismic collision with South Africa.

England flanker Sam Underhill says the team has been focusing on South Africa’s physicality, meaning they will have to pick their moments to engage.

The way South Africa have approached most of their recent games follows a familiar pattern – a huge pack creating a safe space for scrumhalf Faf de Klerk to slowly deliver endless up-and-unders for his teammates to chase.

Trying to counter-ruck to put the scrumhalf under pressure is a tactic England will use, though probably sparingly.

“I think decision-making is the most important thing around the breakdown,” Underhill told a news conference a little over 24 hours before Saturday’s final.

“That is probably the majority of the work we do as a back row, around the breakdown you can’t go after everything. It’s all very well being aggressive but the key is to have control of that.

Picking your moments, that’s a big focus for us.”

Underhill, his fellow flanker Tom Curry and lock Maro Itoje have been England’s chief turnover weapons, bringing a speed and athleticism to the breakdown markedly absence in previous years.

But the sheer size of the Springbok side, not to mention their 6-2 forwards/back split on the bench that ensures the big men keep on coming, means that shifting them is no easy task.

“They are a pretty big side, all over the pack,” Underhill said. “They have guys who get over the ball as we saw against Wales, they counter-rucked pretty well.

“Physically it’s important we turn up and take that part of the game away from them.”

“It’s important in our attack to have speed of ball, and that’s what the opposition don’t want,” he said.

“For any attack to function well you need good speed of ball. In defence there’s not much you can do for what they bring at you, apart from turn up physically.

South Africa knows that England coach Eddie Jones knows all he needs to know about their strategy, but Springboks flyhalf Handre Pollard says there’s no attacking secret up the sleeve.

“There are no big secrets with either of these sides,” Pollard said. “In general the DNA, what we believe and what they believe is not going to change in a week’s time. That’s what got us here and it’s what got them here.

“We won’t be going away from something that we know.

“We may have a couple of trick plays on the day but mostly it will stay the same for both sides.”

6 – Wales wing Josh Adams is the tournament’s leading try-scorer, with South Africa’s Makazole Mapimpi one behind and the only realistic threat.

51 – Japan fly-half Yu Tamura remains the leading points-scorer but will come under threat from finalists Handre Pollard (47) and Owen Farrell (46) of South Africa and England respectively. Dan Biggar and Richie Mo’unga are 12 behind going into Wales and New Zealand’s third-place play-off.

31 – South Africa lead all nations in tries scored, as well as in points with 230. New Zealand and England are second and third respectively in both categories.

21 – with an appearance on Friday, Jones will move into outright third on the all-time World Cup appearance list, one off the record shared by former New Zealand captain Richie McCaw and ex-England prop Jason Leonard.

8 – red cards shown in the tournament.

Rugby World Cup: England to pick its battles with Springboks