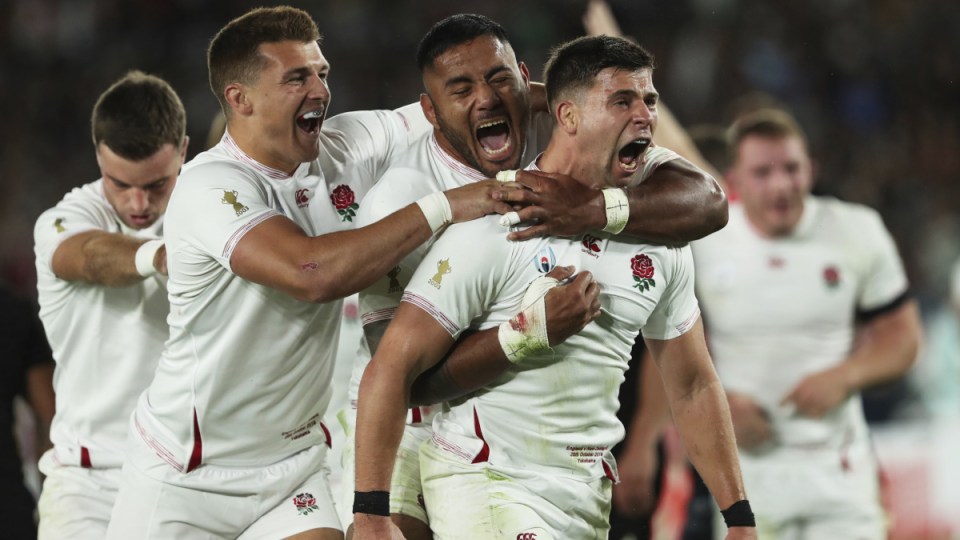 England’s master tactician Eddie Jones says winning the World Cup is about defence and his giant-killing team will go into next Saturday’s rugby World Cup final enjoying the extra week in the competition.

Having last week thrown the Wallabies out of the tournament, the affable England coach conjured another strong defensive effort to upset tournament favourites New Zealand 19-7 to advance to his nation’s first final since losing in 2007 to South Africa.

The All Blacks had been seeking an unprecedented third successive title and had not lost a World Cup match since France shocked them in the quarter-finals 12 years ago.

With a strong defence and a bright early start England was the better team all night at Yokohama and has given itself a good chance to lift the Webb Ellis Cup against either Wales or South Africa, who play the other semi final on Sunday night (AEST).

“Look, we were playing against a great team today,” Jones said on Channel Ten.

“Steve Hansen is a great coach. Kieran Read is a great captain. We knew we would have to dig deep and take away time and space from them.

“We managed to do that and cause a few errors and we had a few lucky bounces and got the result.

I think World Cups are about defence and our best form of attack is our defence. We create opportunities for our defence to attack …

“I’m excited for the boys. They worked really hard to get where they are and we have got another week now

The 2003 champions rattled the All Blacks from the opening whistle with a Manu Tuilagi try in the second minute, setting the tone for the rest of the match as they put pressure on New Zealand’s lineout and at the breakdown.

The All Blacks, who had won 15 of the teams’ past 16 meetings, managed only a gifted try to flanker Ardie Savea.

After defying officials and lining up against the Haka in a V formation, England backed it up once the whistle had sounded with Tuilagi’s try after a sustained, high-paced assault that swept the width of the pitch.

That set the template for the half, with dual playmakers Owen Farrell and Ford full of speed and creativity. The All Blacks, who hardly ventured into England’s 22, would have been relieved to reach halftime only 10-0 down after Ford kicked a late penalty and a Sam Underhill try was ruled out by the TMO.

The only previous time New Zealand had failed to score in the first half of a World Cup match was when they were beaten by Australia in the 1991 semis.

England piled on the pressure immediately in the second half, but suffered another TMO setback when Ben Youngs’ try was ruled out for a knock-on after six minutes.

A Ford penalty made it 13-0 as New Zealand continued to make rare mistakes. But they were invited back into the game when, for the first time, England’s lineout went wrong and Jamie George threw the ball straight into the arms of Savea, who fell over the line.

England hit back immediately after a huge hit on Jordie Barrett by Sam Underhill forced a knock-on and, from the subsequent attack, New Zealand offended on their line again and Ford kicked another penalty to make it 16-7.

Ford, taking over kicking duties after Farrell had been hit hard in the first half, added another to give England breathing space and, led by the extraordinary Maro Itoje, they continued to tackle strongly as the All Blacks became desperate but ran out of time.

“I think they played a tremendous game of footy  … You can’t give them half a step because they’ll take it. That’s what rugby is about and well done to them.

We have to take that on the chin and so does everybody back home and our fans … You saw the boys at the end, they end, they were still trying their guts out and that’s all we can ask of them.

New Zealand skipper Kieren Read was emotional after the game, appearing bloodied and beaten to answer questions for the host broadcaster.

“You have got to give the English the credit. They came out and started extremely well. We couldn’t get into that game,” Read said on Channel Ten.

He conceded that the England defence was too fast at times for the All BLacks to handle.

“We will look at the game and there will be so many what ifs and things we could have done better. At a stage like this, you can’t afford it and it cost us.”

England captain Owen Farrell said it was brilliant to be heading to a final and his team would celebrate before re-setting for next Saturday’s final.

“It is a big game. It is a World Cup semifinal against the All Blacks. It is as big a game as you can get at this stage,” Farrell said on Channel Ten.

“We felt that we prepared well. We started the game well. All these big teams go at you from the off. We wanted to make sure that we were playing that game too.