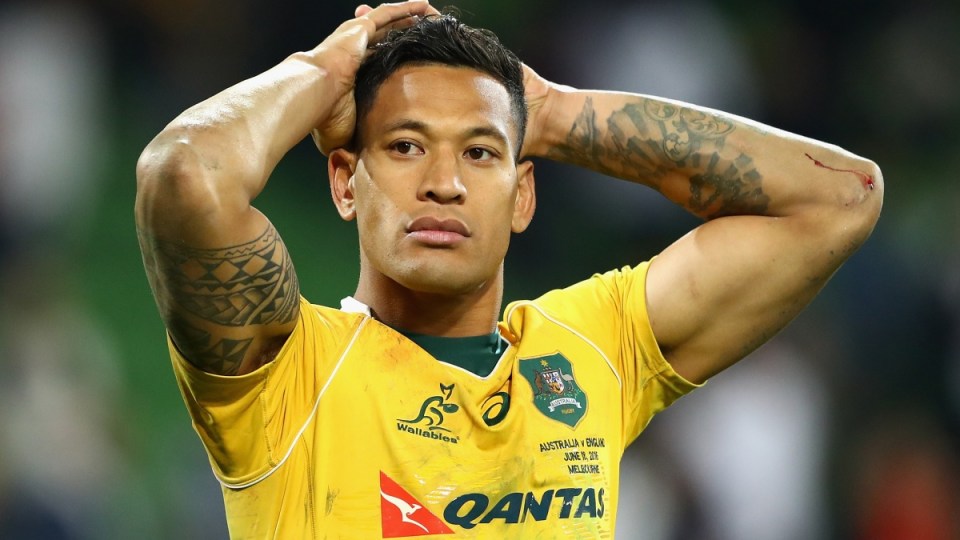 Israel Folau was sacked in May after inflammatory social media posts. Getty

Rugby Australia chief executive Raelene Castle concedes Israel Folau’s sacking was a distraction to the Wallabies ahead of their failed rugby World Cup campaign, but has backed the decision as “a positive thing from a culture perspective”.

Folau was an established member of the Wallabies squad before he was sacked by RA in May for making controversial social media posts about homosexuals and others who he said would go to hell.

The sacking of the 73-Test international dominated headlines in the build-up to the World Cup in Japan where the Wallabies made an exit in the quarter-finals following a humiliating 40-16 loss to England.

“I think when you’ve got a player who chooses to put their views in front of the views of the team and we end up with headlines and people writing things about Rugby Australia as opposed to writing about the rugby, that’s never helpful. Of course it’s not.”

Folau is suing RA and Rugby NSW for unlawful termination of his contract.

A report in The Daily Telegraph newspaper has suggested the well-publicised falling out between Castle and Michael Cheika — who stepped down as Wallabies coach a day after the loss to England in Oita — might affect RA’s legal case against Folau.

Castle said RA had made the right decision to terminate Folau’s contract because it was in the best interests of the game in Australia.

“Rugby Australia were strong in the stance that his public views were unacceptable and then stood up for a culture which is about inclusiveness,” she said.

“It’s a positive thing from a culture perspective.”

RA ‘had to make a change’ on Cheika’s role

RA is in damage control following Cheika’s decision not to seek reappointment as Wallabies coach.

Cheika claimed he “pretty much” had no relationship with Castle and RA chairman Cameron Clyne when he announced he was stepping down after five years in charge of the Wallabies.

He also took aim at RA’s decision to establish the director of rugby role following the Wallabies’ disastrous 2018 season – in which they lost nine of their 13 Tests – with Scott Johnson taking up the position.

Castle said she and Cheika had “worked well together” when she began as RA chief executive early last year.

She defended the decision to appoint Johnson as director of rugby, as she and the RA board felt it was necessary based on how poorly the Wallabies had performed in the year before the World Cup.

“At the end of the day, our win rate was less than 50 per cent. We had to make some decisions … we decided supporting Michael after four years build-up was the right thing to do, that’s what the board did.

“But we also needed to think about the support we put in place.”