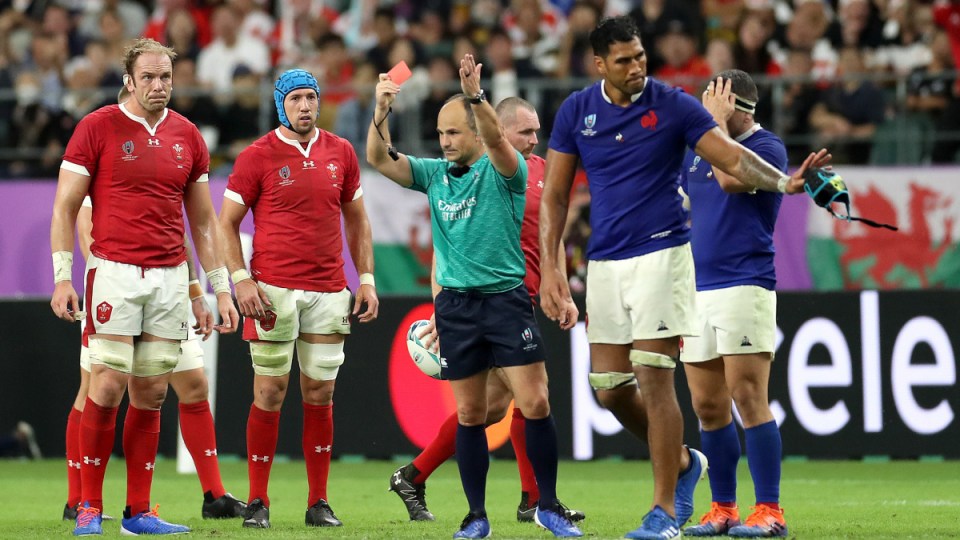 Sebastien Vahaamahina of France receives a red card from referee Jaco Peyper during the match between Wales and France. Photo: Getty

World Cup referee Jaco Peyper has apologised but paid a price after a photograph emerged of him posing with Wales fans mimicking a key red-card incident from Sunday’s quarter-final against France.

World Rugby says Peyper was not considered when selecting the match officials for this weekend’s semi-finals.

“Peyper recognises that a picture of him with Wales fans, which appeared on social media after Sunday’s Wales versus France quarter-final, was inappropriate and he has apologised,” said the governing body in a statement on Tuesday.

Wales beat France 20-19 after Peyper sent off France lock Sebastien Vahaamahina for elbowing Aaron Wainwright in the face when France were leading 19-10 early in the second half.

A picture being circulated on social media shows a smiling Peyper in the middle of a group of celebrating Welsh fans, with the South African raising his elbow to seemingly mimic the violent incident that led to Vahaamahina’s sending off.

French Rugby Federation vice president Dr Serge Simon said on Twitter: “This photo, if it is true, is shocking and explanations will be necessary.”

The coaches from both teams involved agreed it had been the correct decision to send off Vahaamahina, who had earlier scored France’s first try in the match.

Vahaamahina, 28, faces a World Rugby disciplinary hearing on Thursday but its consequences will be minimal after he announced his retirement from international rugby later on Monday.

Welshman Nigel Owens will referee the blockbuster New Zealand-England match on Saturday, with French officials Romain Poite and Pascal Gauzere on the sidelines and South Africa’s Marius Jonker as the TMO.