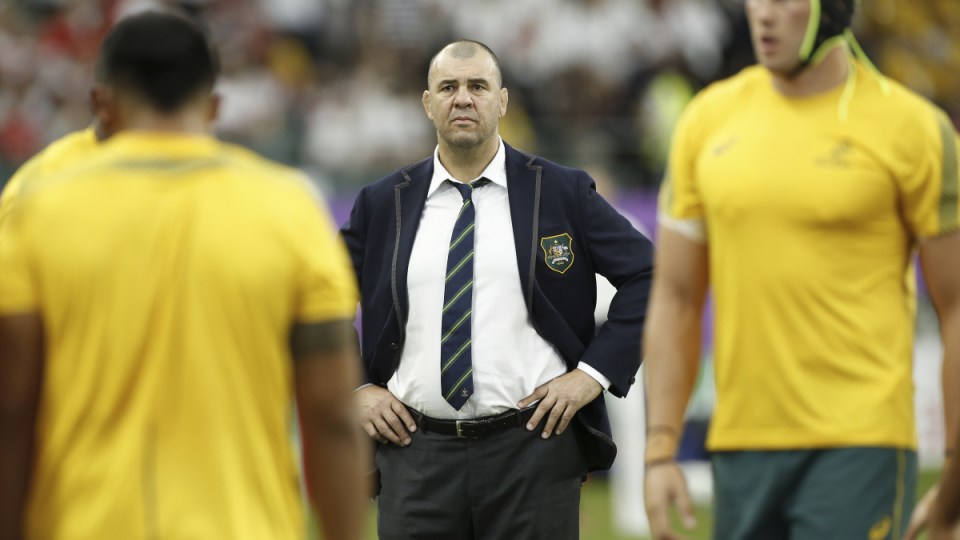 Coach Michael Cheika is leaving his job after the quarter-final loss to England at Oita, Japan on Saturday. Photo: AAP

“There are two types of coaches – those who have been sacked and those who are waiting to be sacked,” Kiwi rugby league coach Graham Lowe once observed.

And thus, via resignation before his contract was not renewed, Michael Cheika moves on.

As we now know all too well, there was no surprise plan for the Wallabies this Rugby World Cup.

The chopping and changing of combinations, the incredibly dumb rugby displayed in pool games, the one-dimensional play, the failure to develop and practise an even half-effective kick-and-chase capability – it was not some clever ruse. It was just how the team was coached.

The result was an ill-prepared side playing scrappy rugby being thrashed four-tries-to-one by a better-drilled, more complete but not flash team playing more intelligent football with no obvious weaknesses.

England will be eaten alive by the All Blacks next weekend.

Yes, the Wallabies looked good at the start and came back to within a point at one stage, but there is no room for claiming the teams were closer than the score, as Cheika attempted.

England’s defence was very good. It was made easier by knowing exactly what was coming.

And none of the Old Enemy’s tries came from English brilliance.

Two were the result of Wallabies simply failing to number up close to the line, lacking the intensity of, say, the Brave Blossoms, lacking England’s ability to count.

The other two came from intercepted dumb passes, but they weren’t flukes – there was plenty of sloppy and silly Wallaby passing through the game that would have to end up costing points somewhere.

Then there was the professional control of the game by England, working the field possession and the penalties to close it out.

It is not fair to blame individual players.

They were selected as the best we had and obviously tried their hardest.

It was not their fault that they were outclassed in a couple of key positions when tasked with playing a sort of rugby that was beyond their collective skill level, that exposed rather than compensated for their weaknesses.

It is not the player’s fault if the selectors make mistakes, as selectors always will.

It also is wrong to misread the statistics, as has been done.

Those numbers are the outworking of the Wallabies’ one-dimensional game, not a sign of strength in itself.

Let me indulge with the story of Brother Brosnan, coach of the 1972 Nudgee College second XV.

He forbade anyone to kick, other than for a penalty or conversion.

I mean, he really forbade it on pain of being dropped. The halfback reflexively cleared when close to the line once early in the season and escaped with a most severe warning. Nobody kicked again.

Paul McLean was in the firsts the year ahead of us. Brother Brosnan ruled you could only kick if you could kick as well as Paul McLean. So we didn’t kick.

Being Nudgee and 1971 and no other team expecting such crazy behaviour, we got away with running it from everywhere much more often than we didn’t.

However much one might like to romanticise the past, things have changed a bit between 1971 schoolboy seconds XV rugby and the 2019 Rugby World Cup, yet it seemed the long-departed Brother Brosnan had taken possession of Michael Cheika’s soul.

So what happened to Cheika the successful provincial coach who took over the Wallabies to wide acclaim and the one who has just quit?

I think The Guardian’s Brett Harris may have the best explanation.

At the championship-winning provincial level of Leinster and the Waratahs, Cheika could buy international players to cover weaknesses. He couldn’t do that at the international level – he could only have the cattle he had.

What Rugby Australia now desperately needs is a coach, coaching framework and overall administration that can identify, keep and develop players.

A prescient column by Wayne Smith in The Australian after the first rugby league State of Origin match this year nailed Rugby Australia’s failure to develop any new blood in the crucial halves positions since the previous world cup, pointing to the NRL’s Kalyn Ponga as an example of young rugby player who was allowed to get away.

If that sort of failure can be fixed, the future is not as bleak as Saturday’s performance had many fans feeling.

Sure, many of the RWC squad are departing, but most of the best 2019 players are not.

Our Under 20s and schoolboy sides did very well indeed this year.  In four years, we could have a fine mix of experience and sharp youth.

Yes, the sun does come out again, even after being whipped by the Poms.

There are two types of coaches … as Michael Cheika departs