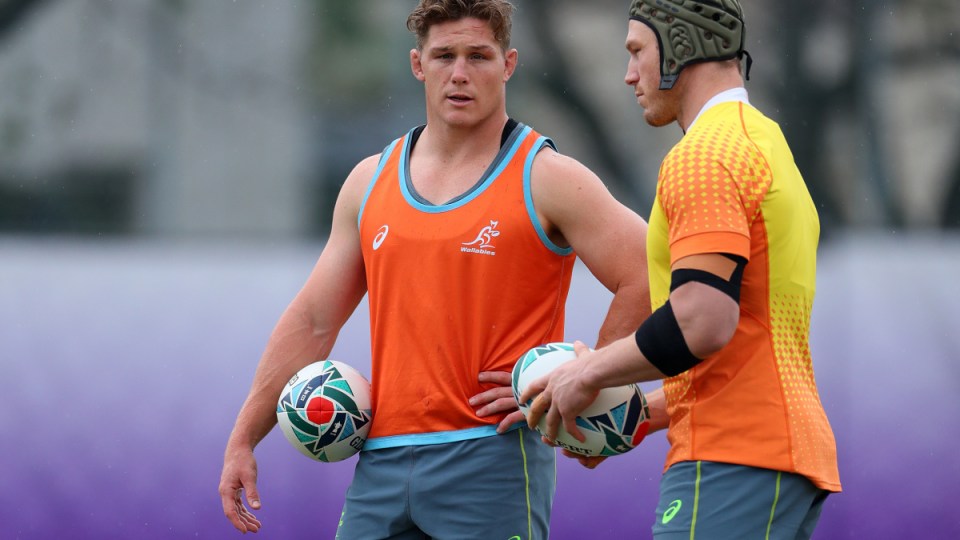 When are we back? Wallabies Michael Hooper and David Pocock at a training session before the shutdown. Photo: Getty

Pooper against the Kamikaze Kids. It sounds like something a Japanese anime artist might dream up, not the front line battle that could decide the fate of the Australia-England Rugby World Cup quarter-final.

Two sets of openside flankers boasting the same ball-hunting modus operandi but hailing from vastly different backgrounds, will square off on Saturday.

Wallabies Michael Hooper and David Pocock will start a 27th Test together as “Pooper” and hope their experience can make a difference at Oita Stadium.

The pair who share 180 caps between them were stars at the 2015 World Cup but haven’t hit those heights yet in Japan.

In the white corner are English tyros Sam Underhill, 23, and Tom Curry, 21, owners of just 28 combined caps and who started their first Test as a pairing less than two months ago.

They were dubbed the “Kamikaze Kids” by England coach Eddie Jones, for their trail of destruction they leave at training as much as their unrelenting energy on the playing field.

Wallabies skipper Hooper, who is only 27, was asked if he felt old lining up against the pair who earlier in the week said they were teenagers when they began admiring the Pooper combination’s influence on games.

“As far as experience goes, you could go, yeah, it’s great to have experience but also being youthful is of benefit. I have been in their shoes before, being wide-eyed, ready to attack things.”

Bath forward Underhill said the Wallabies pair blazed a trail for what is becoming a trend among leading nations.

Other leading nations such as New Zealand have reverted to twin openside flankers for the World cup.

“Pocock is probably the best in the world in terms of how strong he is, and his body position. On top of that they have good timing,” Underhill said.

“I think timing is probably the most important of the two. But in a way they are kind of a victim of their own success.

You can see how much emphasis teams put on negating players who are good at the breakdown now.”

Hooper believed an important factor will be adjusting quickly to the breakdown boundaries established by French referee Jerome Garces.

He and Pocock found success attacking turnover ball in some pool games, which suits the Wallabies’ strengths, but definitely not in others.

“I have observed the ruck being refereed a multitude of ways, not any one way in particular. So, it’s made it quite tricky there,” he said.

Jones backed his tearaways, in conjunction with bullocking No.8 Billy Vunipola, to at least hold their own.

He rated Pocock the best No.7 in the world over the last decade, even eclipsing All Blacks great Richie McCaw, while Hooper had developed into a “massively important” leader for the Wallabies.

“But our two young boys are just getting better every game,” Jones said.

Melania Trump: Bombshell revelations about what she did during US Capitol riot
Retailer pauses facial recognition tech trial after privacy complaint
Donald Trump grabbed at steering wheel in bid to get to Capitol riot
Two charged over US migrant truck deaths
Governor-General admits ‘mistake’ over Insta ad endorsement
Hundreds of hives destroyed in bee mite eradication effort
Wallabies face the old enemy, but they must be born anew
Today's Stories