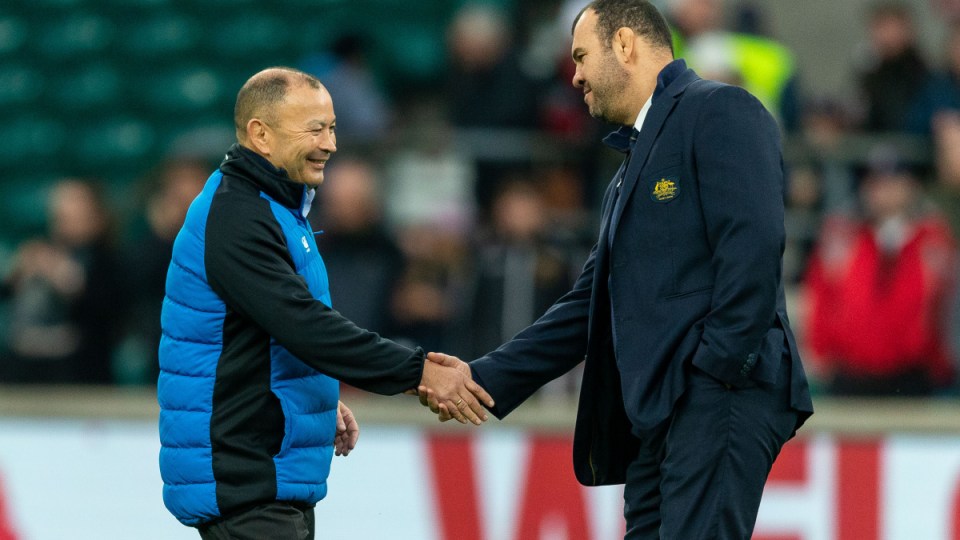 While the storied history between coaches Eddie Jones and Michael Cheika has been one of the main plot lines of the Australia-England World Cup quarter final, it has been left to Matt To’omua to humorously fill in some of the other rivalries for Saturday’s all-or-nothing Test.

Jones and Cheika were teammates at Randwick in the 1980s, but now share an often often-gnarly relationship.

On the eve of the seventh meeting between the teams in just nine editions of the World Cup the pair assumed their familiar positions.

Asked for his assessment of Cheika and the Wallabies, Jones offered: “I’m proud of the job he does … He’s a good old mate of mine.”

They have really crossed each other’s paths only in coaching circles since the 2015 World Cup, after which Jones became England’s first overseas head coach.

Perhaps Cheika took that as some kind of an affront

“It always hurts me when there’s an Aussie over there,” he said on Thursday.

That might explain the antagonism between the pair, which really kicked off in 2016.

England swept its three-Test tour of Australia that year in unprecedented fashion. On arrival, Jones said, in what felt very much like sarcasm, that Cheika was the “best coach in the world”.

Cheika had been voted coach of the year in 2015 after turning Australia from a shambolic squad into a World Cup finalist.

Jones, who coached Japan at the 2015 World Cup, later added that he felt he was disrespected by Australia on his return to his homeland.

Whether he genuinely felt that, or it was simply a psychological ruse, Cheika bit.

He accused Jones of damaging his own “legacy” with his incendiary remarks about Australia, bemoaning his counterpart’s “vitriol” toward the country where “opportunities were given to him to catch and grow up as a coach and play.”

Cheika didn’t like the way Jones organised a coaches’ meeting with match officials ahead of Wallabies’ game against England later in 2016 at Twickenham, which they lost.

“I wouldn’t know him if I didn’t play footy with him,” Cheika said, referring to their Randwick connection.

“We wouldn’t have associated.”

Days later, Cheika said Jones “always operated with a chip on his shoulder.” The following year, before another meeting at Twickenham won by England, they clashed over talking about referees to the media.

It's a classic Rugby World Cup Rivalry. Who have you got to progress at #RWC2019, @EnglandRugby or @wallabies? #ENGvAUS #WebbEllisCup pic.twitter.com/FRLxBmsEUm

At this World Cup in Japan, Cheika couldn’t resist reacting to cheeky comments from Jones about the “typhoon gods” smiling on the English after their pool game against France was called off because of the destructive Typhoon Hagibis. That gave England an extra week of rest before the quarter-finals.

“They’ve had the best preparation, according to the coach, so they’d better go out there and win.”

Lightening the mood this week was Wallaby Matt To’omua, who gave an entertaining media conference based on his time at English clubLeicester.

Although unable to crack the starting XV, the versatile back returns to the reserves bench role. He has already made an impact in opening pool games against Fiji and Wales.

Having spent the past three seasons playing in the English Championship, To’omua is well placed to assess the attributes of opponents he knows well.

With a smile, he first delivered off-field observations of the five Leicester players lining up in England’s match day 23.

“I know all their weaknesses, luckily, and I have been telling everyone,” he said.

“Manu [Tuilagi] is a terrible snooker player, George Ford never pays for a beer, Ben Youngs isn’t even the best rugby player in his family, let alone the country. The chicken, Jonny May, very weird and Dan Cole doesn’t have a personality.”

It’s a small world rugby, and a big World Cup.