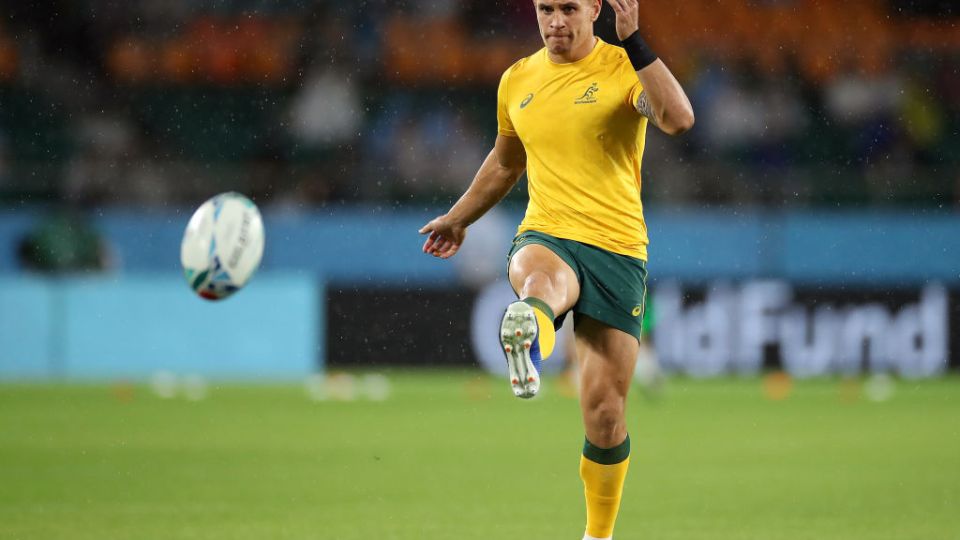 There is no evidence Albert Einstein ever said insanity is doing the same thing over and over again and expecting different results.

There also is no evidence of anything Einstein-like about the Wallabies’ performances at the Rugby World Cup.

But the team saved its dumbest rugby for the final pool game against Georgia on Saturday. It fitted the insanity definition.

I thought the first half against Uruguay the previous weekend was the worst Wallabies play in two years.

Against Georgia, it was a solid 75-minute display of wrong-headedness, with the final five minutes not mattering.

And it seems the only possible explanation is that the players were following the coach’s orders to play dumb rugby. Seriously.

Given the rain and allegedly swirling wind, it was the dumbest rugby. Very seriously.

Yes, the Wallabies played good football for 50 minutes in the thrilling Welsh Test and came to their senses long enough to beat a tiring Fiji in that second half. Against Georgia though, the insanity was consistent.

Three measures of that:

And that was all the doing of coach Michael Cheika, whose first priority on Saturday seemed to be giving Georgia tackling practice – an incredible 218 tackles compared with Australia’s miserly 47. (The missed-tackle count was respectively 30 and 8, meaning the Wallabies were proportionately worse in defence.)

Looking at it the other way around, Cheika’s intent must have been to give the Wallabies practice at running into brick walls.

Yes, loyal reader, this all comes down to Cheika’s declared abhorrence of the kicking game.

What seemed to be a joke before the match turned out to be true. Rugby.com.au reported that, asked pre-match if his team would use a tactical kicking game given the conditions, Cheika said: “I don’t think we have one”.

I took one for the team, dear reader, and watched the game again to check my initial impression that the Wallabies have never before kicked so little in general play. (OK, I did watch at high speed as it would have been too painful otherwise.)

So basically, only one non-clearance or penalty-advantage hoist.

Like most Wallaby fans, I have come to hate random box kicks from Wallaby halfbacks and our often-imprecise tactical kicking with poor chasing.

But this was wet weather football. It was raining. The ball was slippery. The sideline commentary said the wind was swirling and strengthening. And there was a flat wall of big, tough tackle-hungry Georgians.

In such circumstances, any club fourth-grade five-eighth would think a high ball might be tricky to catch and that to pop a little one over that very solid wall might disrupt the defence. And if that five-eighth had a dominant lineout …

The Wallabies had the dominant lineout on this wet night, winning five of Georgia’s 11 throws and losing only one of their own 19. Smart teams play to their strengths.

So maybe you’re hoping Cheika was just being dangerous and disrespecting Georgia by using this as a training run. But that is not what he has been saying.

The coach was defending not having a kicking game after the Georgia game and before the RWC even started.

“We’re not big kickers of the ball,” Cheika said before the Wales game.

“Australians like to play with the footy in hand. It’s not going to be perfect all the time. That is the way we are born to play.

“I get it. I understand there are the tactics, kick and pressure, and all that business, but there is no guarantee that style of footy is going to win us games either. There is no one saying, ‘Play like that and you are guaranteed victory’. There are plenty of teams that play like that and don’t win.”

Cheika said the running game “is who we are and that is how we want to play footy”.

“That’s how I’d like my young fellas to play footy, and I’d like the young Aussies to watch us playing like that. And maybe pass a bit better, catch a bit better.”

All very admirable, particularly if you had a team with as much depth and talent in the backs as, say, the All Blacks, and winning the World Cup is not your first priority.

For the current Wallabies, it’s like a rally car driver saying rear-wheel drive is what he loves, that there’s nothing better for drifting through a corner, so he disconnects the all-wheel drive on his vehicle.

With the Bathurst weekend in mind, it’s like someone with a Mustang GT saying he thinks V6s are more fun than V8s and taking out two spark plugs.

One of the nicest bits of rugby analysis this year turned up on Theroar.com.au, a cool look at what really won matches in the Super XV competition. It was mainly an intelligent use of the boot.

I can think of only three possibilities:

I would love to believe in the third. We’ll find out.

Is dumb exit strategy just for kicks?: What the Wallabies must start doing to beat England