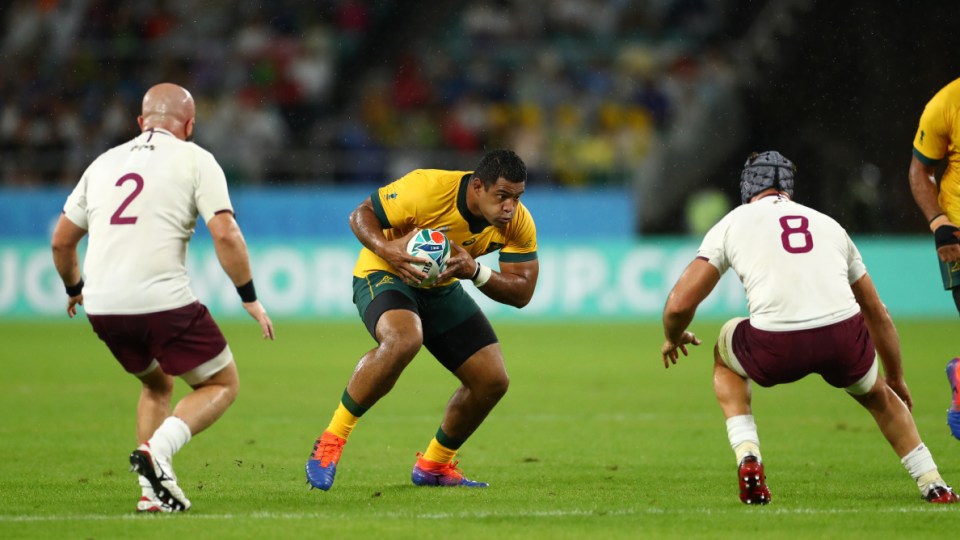 Ball in hand, now what? Scott Sio in action against Georgia. Photo: Getty

His only concession is they’ll need to do it an awful lot better in a quarter-final against England if they’re to bring home the Webb Ellis Cup.

An error-riddled performance in beating Georgia 27-8 on Friday showcased both the positives and negatives that come from a game plan where kicking in general play is a rarity.

By retaining the ball on the back of a dominant pack display, the Wallabies had a mortgage on possession and territory, forcing their tier-two foe to attempt more than 200 tackles.

However, the chances of making mistakes escalates, only heightened by playing in wet, windy pre-typhoon conditions in Shizuoka.

Cheika had warned the high-risk Australian method was coming when asked in a pre-match interview if conditions were right to unleash a tactical kicking game.

“I don’t think we’ve got one of those. Kicking the ball, it’s not in our nature,” he said.

His tune hadn’t changed after the final whistle.

We like to play with the ball in our hand… but there were a few things that we definitely need to work on out the back. We’ll get to that during the week.”</p> <p>

Cheika outlined some of his concerns, believing the backline should have stood flatter on attack and been more decisive when attacking holes.

It’s hard to know if those comments will count against Matt To’omua, who was handed a start at five-eighth for the first time in nearly a year.

Cheika described the utility player’s performance as “solid”, giving little away over whether to persist with To’omua or restore specialist No.10 Christian Lealiifano.

One player not under any threat is winger Marika Koroibete, whose sensational solo try in the 60th minute was the best of four register by the Australians. It helped to spark the Wallabies, who were just seven points up at that stage.

Two who had less memorable days were fullback Kurtley Beale and No.8 Isi Naisarani.

Beale will undergo a week of concussion testing following his groggy early exit, while Naisarani will be sweating over the possibility of a citing for his high first-half hit.

Meanwhile, the Wallabies began a relocation process soon after fulltime, catching a bus in the direction of Tokyo but finding roads had been closed ahead of tyhoon Hagibis striking Japan on Saturday.

Cheika’s men could spend an unexpected couple of days at their pre-tournament suburban training base of Odawara.

They are expected to fly to Oita on Japan’s main southern island later than scheduled, on Wednesday.