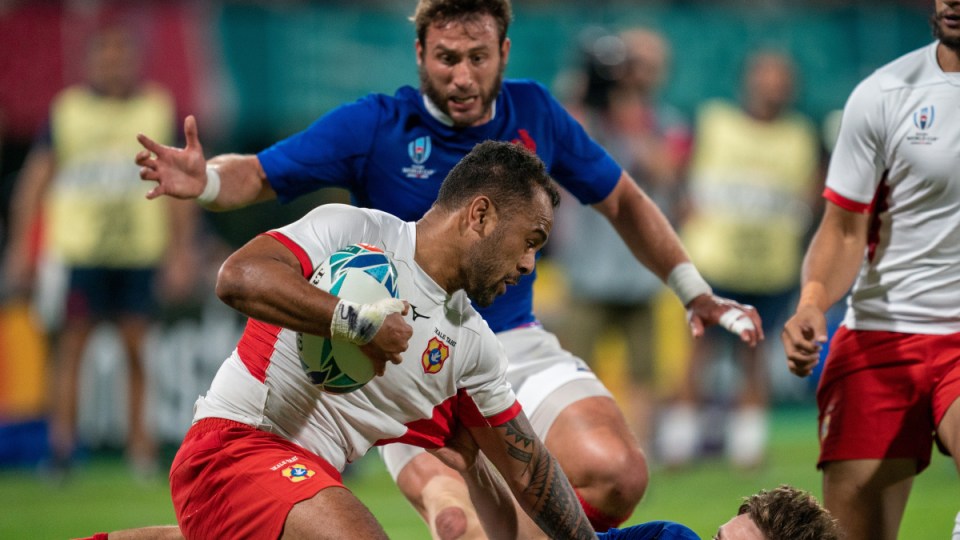 France in action against Tonga earlier in the tournament. Photo: AAP

A “violent” tropical storm bearing down on Japan has forced the cancellation of two rugby World Cup clashes.

The game between England and France has been called off, as has the group match to have featured New Zealand and Italy.

It is first time in the World Cup’s 32-year history that a game has been cancelled.

“We fully appreciate that England, France, New Zealand and Italy fans will be disappointed, but we trust they will appreciate that their safety must come first. They will be entitled to a full refund on their match tickets.

Described by the Japan Meteorological Agency as “violent”, typhoon Hagibis will bring torrential rain and winds of up to 270km/h to the Pacific side of western and eastern Japan from Friday.

The meteorological agency has also warned of floods caused by high waves and tides when the storm hits the southern island of Honshu on Saturday afternoon.

Hagibis, a category 5 typhoon, did not weaken or change its path overnight on Wednesday, and is forecast to hit the greater Tokyo region.

The city’s civil defence staff have begun emergency planning and world rugby bosses have already said they will make safety a priority.

Rescheduling is a possibility, but is considered unlikely because of the resulting disruption to the rest of the tournament.

Any matches that are abandoned will be recorded as a 0-0 draw. That would mean the All Blacks topped their pool, and England would come out first in its pool – progressing to a likely quarter-final against Australia.

If it is cancelled, Japan will go through as group winner – leaving Scotland disappointed.

The Wallabies, who face Georgia 200 kilometres south-west of Tokyo in Shizuoka on Friday night, are unlikely to be affected by Hagibis.

Michael Cheika’s team is almost certain to finish second in pool D, leading to a quarter-final against the winner of pool C – England or France.

Meanwhile, the typhoon might also affect this weekend’s Formula One Japanese Grand Prix.

Typhoons have previously hit the race at the Suzuka circuit, about 375 kilometres west of Tokyo, forcing qualifying to be held on Sunday instead of Saturday.

Monday is a national holiday in Japan, meaning Sunday’s race could potentially be pushed back a day.

Practice for the Japanese GP is scheduled for Friday. Qualifying is set for Saturday.