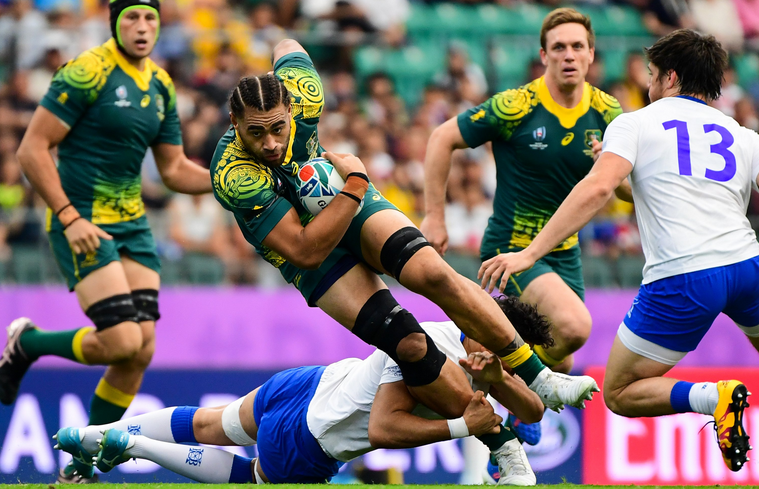 If only all Rugby World Cup contests could be such cakewalks for the Wallabies.

It took nearly 78 minutes and a Herculean effort on Australia’s goal-line for Uruguay to score a try in their 45-10 Rugby World Cup defeat, but the late five-pointer was more triumph than consolation for the thrilled South Americans.

Camped in the Wallabies’ 22 for much of the last 10 minutes, Uruguay was repelled repeatedly by desperate defending but No.8 Manuel Diana finally burrowed under a ruck to sneak the ball over and trigger a huge roar from the sympathetic crowd at Oita Stadium on Saturday.

The lion-hearted effort put some gloss on a torrid afternoon for Uruguay but for their coach Esteban Meneses, it was evidence the developing rugby nation was closing the gap on the giants.

“Of course, the younger players have developed in Uruguay rugby and there is a better potential to make corrections,” Meneses said.

“Being able to score a try from a maul or a scrum is showing the potential that Uruguay has in terms of achieving evolution. I think we can continue this evolution and I am very happy.”

Uruguay were unlucky not to have a try early in the first half when Wallabies captain Michael Hooper collared Nicolas Freitas with a high tackle metres before the line and conceded a penalty.

They blew other chances with handling errors and errant passing, while allowing the Wallabies’ runners too much space in the second half.

But the result was a big improvement on the 65-3 mauling by the Wallabies at the World Cup in England four years ago.

Having opened their tournament with a bang by upsetting Fiji, Uruguay will hope to finish off strongly against Wales on October 13 as they continue their mission to earn respect from the game’s top teams.

The @Wallabies are still on track to take a @rugbyworldcup quarter-final spot after a 45-10 win over Uruguay. #AUSvURU #RWC2019

As far as Australia coach Michael Cheika was concerned, it was already mission accomplished for Uruguay, adding governing body World Rugby deserved credit for efforts to develop the tier-two nations.

“I think what they’ve done has been excellent and it’s really good for the game as a whole,” he said.

“Because every game’s a contest. We’ve seen that with Uruguay, with their improvement from four years ago.”