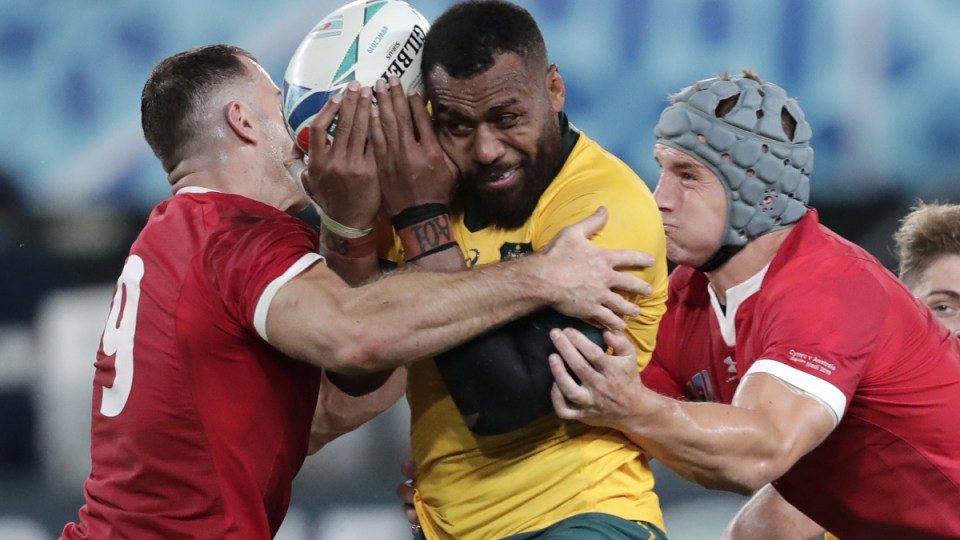 Wallabies coach Michael Cheika says referees are “spooked” by their bosses at the Rugby World Cup and his team have paid the biggest price for it in their dramatic 29-25 loss to Wales.

A stirring fightback wasn’t enough on Sunday at Tokyo Stadium, as Australia battled back in vain from 18 points down soon after half-time, closing to within a point entering the final 10 minutes.

They couldn’t score again, an outcome that means they’ll probably finish second in group D and, if other results fall as expected, face England in the quarter-finals and potentially New Zealand in the semis.

The Wallabies scored three tries to two and were the vastly superior team in the second half, but they paid for an error-riddled opening 40 minutes that lacked purpose and execution.

Their other bugbear was long delays that halted momentum, when French referee Romain Poite and Kiwi TMO Ben Skeen ruminated on a number of collision incidents.

Most rulings went against Cheika’s men, most notably when centre Samu Kerevi was penalised for raising his forearm to the chest of replacement Welsh five-eighth Rhys Patchell.

It proved match-swinging as Patchell landed the subsequent penalty and a rejuvenated Wales scored a try in a key period just before half-time.

“As a former rugby player, I’m embarrassed about that,” Cheika said.

“They (match officials) all seem spooked, like they’re all worried about things so much. I’m not sure why they’re worried. Players aren’t worried.

“They’re making decisions on all types of crazy stuff.”

Cheika has other issues to address after re-introduced halves Will Genia and Bernard Foley failed to stamp their authority.

It mirrored last week’s struggles for starting pair Nic White and Christian Lealiifano in the win over Fiji.

Asked on Channel Ten about how the loss affected Australia’s tournament, the coach said he wasn’t thinking about it … yet.

“Any positives we take we’ll keep to ourselves I think because, we were looking good in the scrum tonight, got penalised. Maybe Australia is not allowed to scrum any good.

“I am keeping them to myself. I know you are expecting me to go [off]. I’ll keep my powder dry and see where we end up.”

Matt Toomua’s injection off the bench soon after half-time provided a playmaking spark. He might have forced Cheika’s hand for next week’s match against Uruguay.

Wales opened the scoring inside 35 seconds through a Dan Biggar drop goal.

Both teams notched their first tries through cross-kicks.

A Foley penalty goal drew Australia within two points before Patchell slotted two himself and halfback Gareth Davies bagged a crucial try on the stroke of half-time to put his team clear 23-8.

Davies raced 60m after timing his run perfectly to intercept a Genia pass.

A Patchell drop goal pushed Wales further ahead before Toomua sparked the try of the game, making two breaks in the lead up to the impressive Dane Haylett-Petty crossing.

Australia’s mortgage on possession and territory in the second spell set up a burrowing try to captain Michael Hooper to reduce the deficit to four points.

Wales halted the momentum through a Patchell penalty and defended fiercely in the final minutes.

Patchell was a key figure, having entered on the half-hour mark after Biggar suffered a concussion when pulling off a try-saving tackle on Kerevi.

The defeat is just the third Australia has suffered in any World Cup pool phase, after losses in 1995 to South Africa and 2011 against Ireland.

Hooper clearly felt some lucky calls went the way of the Welsh as the game got tight.

“We gave away momentum, particularly in the first half,” Hooper said on Channel Ten.

“Back-to-back points hurt us. Congratulations to Wales for
holding us out.

“Some big calls there. Some went our way, some didn’t. We have to pick ourselves back up … recovery is key.

“We will review it. This sort of format competition, you’ve got to move on pretty quick.’’

Cheika says refs were ‘spooked’ as Wallabies lose to Wales