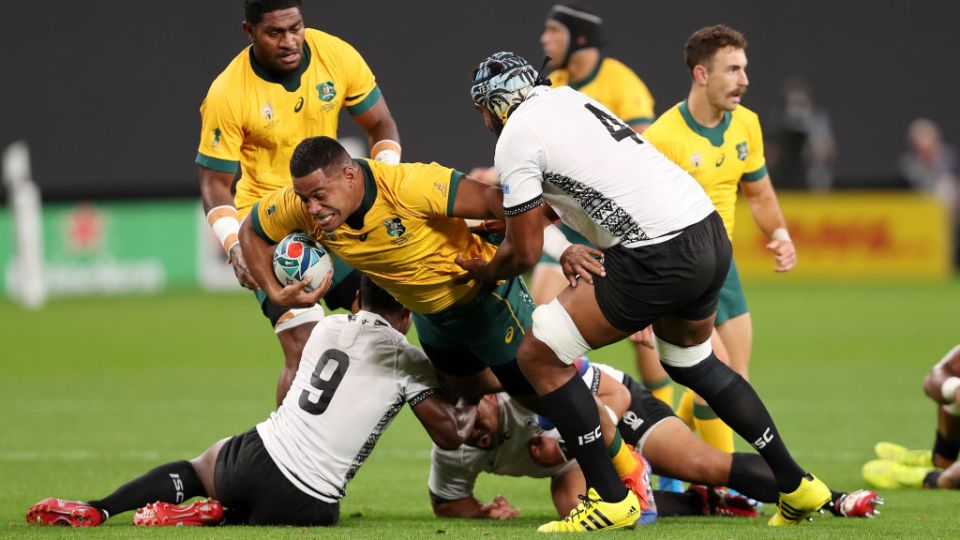 The Wallabies got through Fiji in their quest for world cup glory. The next challenge is Wales. Photo: Getty
analysis

There’s only one crucial Rugby World Cup match this weekend – Australia v Wales. For Australian fans, there’s one crucial question: which Wallabies team will turn up?

Only one of those four teams can defeat Wales on Sunday evening, thereby topping their pool and setting course for a winnable quarter final against France.

This is not about the actual personnel who took the field in those four games, but how switched on and disciplined the team is on the occasion.

As far as the horses for this particular course, the selectors have done what they had to do after Reece Hodge’s suspension.

It’s a more conservative team for a well-known conservative enemy that will rely on rock-hard defence and a finely-tuned kicking game.

Dane Haylett-Petty has to be at fullback because he’s better than Kurtley Beale in average form under the expected high balls. DHP also seems to be the best of the current Wallabies are reliably beating the first and often second defender.

Beale will be great to bring on from the bench as the situation demands and where it demands.

With no Hodge, the trusted veteran Adam Ashley-Cooper is solid on the wing. With 119 tests under his belt, he won’t be phased by anything Wales throws at him.

And it’s a return to the more experienced halves of Genia and Foley. Not as exciting as White and Lealiifano, but “exciting” isn’t always the first priority. An indication of how rugged the selectors expect this test to be is that the very fine Lealiifano didn’t make the bench – that’s Matt To’omua’s role.

How important will goal kicking be? Dan Biggar this year has kicked 85 per cent for Northampton and 91 per cent for Wales – 20 out of 22.
The last time these two teams met, it was all kicks, 9-6 to Wales in Cardiff last November.

That result broke a 13-match winning streak the Wallabies had enjoyed over Wales. On top of the Six Nations success, it gives the Welsh confidence about Sunday.

But the Wallabies have the talent to beat Wales on Sunday, man-for-man more talent than this good Welsh side – as long as the right team turns up.

It has to be a team turned on and ferocious from start of the national anthem, never mind the kickoff. And it has to be the most disciplined Wallabies team this year – giving away dumb penalties would cost us the match.

It’s going to be a great test. The Wallabies by 5, I hope.

Which Wallabies team is turning up this weekend?