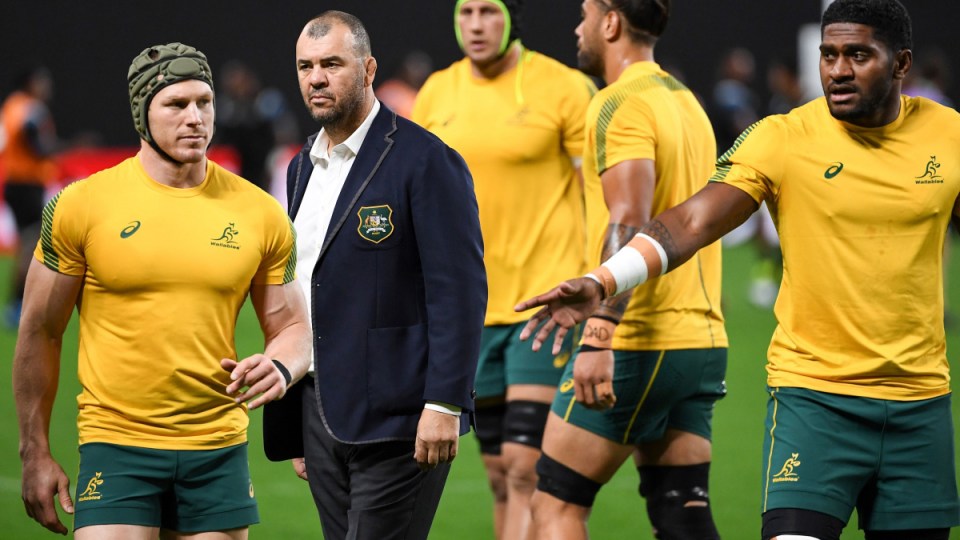 Wallabies coach Michael Cheika with his players before the game against Fiji. Photo: Getty

The Wallabies needed their biggest comeback in tournament history to see off Fiji 39-21 in Sapporo on Saturday, having trailed by nine points.

Despite expressing satisfaction with most areas of the game, Cheika set up a week of debate by revealing his desire to “interchange” players throughout the tournament.

Making regular changes would contrast with the 2015 approach when a near-identical team played in six of seven games and were rested en masse in a pool fixture against Uruguay.

Cheika believes there is greater competition for starting berths in Japan.

“I think I like them interchanging this time around, you know?” he said.

“It’s so even around those (selection) contests. They can all do different jobs, sometimes starting, sometimes finishing.

When you’ve got those types of contests, that’s what we want.’’

Several members of the starting XV in Sapporo – the backs in particular – looked uncertain early against the rampant Fijians and may fear the axe is hovering.

Kurtley Beale was jittery at fullback, while Cheika may be tempted to switch one or both halves against the Welsh in Tokyo on Sunday.

Nic White and Christian Lealiifano couldn’t stamp their mark when Fiji was winning all the initial collisions.

Veteran halfback Will Genia was an assured figure in the last half hour, although the Wallabies pack had established control by then.

Matt Toomua shone off the bench at five-eighth and has potentially injected his name into the No.10 race, alongside the proven Bernard Foley.

“I would like a lower number on my jersey for sure,” Toomua said.

“He (Cheika) obviously has ideas in his head, along with the other selectors … but I’m not getting too carried away with the last 20 minutes. We were benefactors of the guys starting, who took a fair few hits.”

Demoted flanker Lukhan Salakaia-Loto made a muscular impact when replacing rookie No.8 Isi Naisarani, who had his first ineffective outing in the green and gold.

Closing pool play against minnows Uruguay and Georgia will grant the Wallabies further licence to experiment with selection.

“I don’t know if it’s ever going to end up that this is the No.1 side,” Cheika said.

One change may be forced on the right wing, depending on whether a citing officer takes action following Reece Hodge’s try-saving tackle on Peceli Yato, which resembled a shoulder charge.

The tackle left star flanker Yato concussed and unable to return, robbing Fiji of the game’s dominant figure through the first half hour.

Any citing must take place within 36 hours of the game finishing.