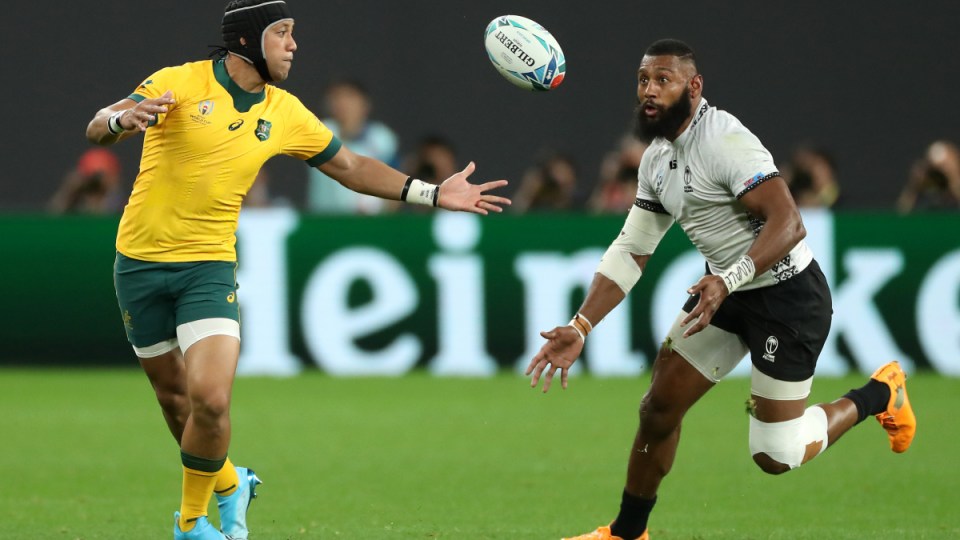 The Wallabies have fought back to avoid a catastrophic result at the Rugby World Cup, needing two tries from hooker Tolu Latu to help see off Fiji 39-21 in Sapporo.

Trailing 21-12 with a half-an-hour remaining on Saturday, the Australian pack took command to ensure they dodged what would have been one of the worst results in their tournament history.

Despite ultimately scoring six tries to two, there is plenty of work for Michael Cheika’s men to do before playing Wales next week after an error-riddled first half performance in which they had been bullied by the Fijians.

The turnaround after the break was stark, as Australia took control of the tight exchanges, draining the energy from their opponents.

They dominated the last 35 minutes through adopting a more-conservative game plan.

Trying to match Fiji’s flair backfired badly early as the smaller Wallabies’ backs were man-handled or knocked over like tenpins.

Basic passing and attacking skills were abject at times and they struggled to put phase play together.

However, there were early hints of dominance at scrum time and in driving play, an advantage which had turned into a chasm by the end of the game.

It took until the 62nd minute to lead for the first time, when Latu notched the second of two tries in quick succession from lineout drives.

Fiji were 8-0 up inside eight minutes after Josua Tuisova busted through Reece Hodge’s tackle to set up a try to flanker Peceli Yato.

A decision to kick a penalty for touch rather than at goal paid dividends when Hodge crossed just before the break, put clear by neat passes from James O’Connor and Kurtley Beale.

Australia made a horrific start to the second spell when a loose Samu Kerevi pass was snapped up by midfield counterpart Waisea Nayacalevu, who galloped 50m.

Hodge’s penalty pulled the Wallabies back within sight before Latu powered over for his double, earning him man-of-the-match honours. That award could have gone to any of his tight-five colleagues, such was their influence on the game.

The backs eventually had their say, with Fijian-born pair Kerevi and Marika Koroibete taking advantage of a weight of possession.