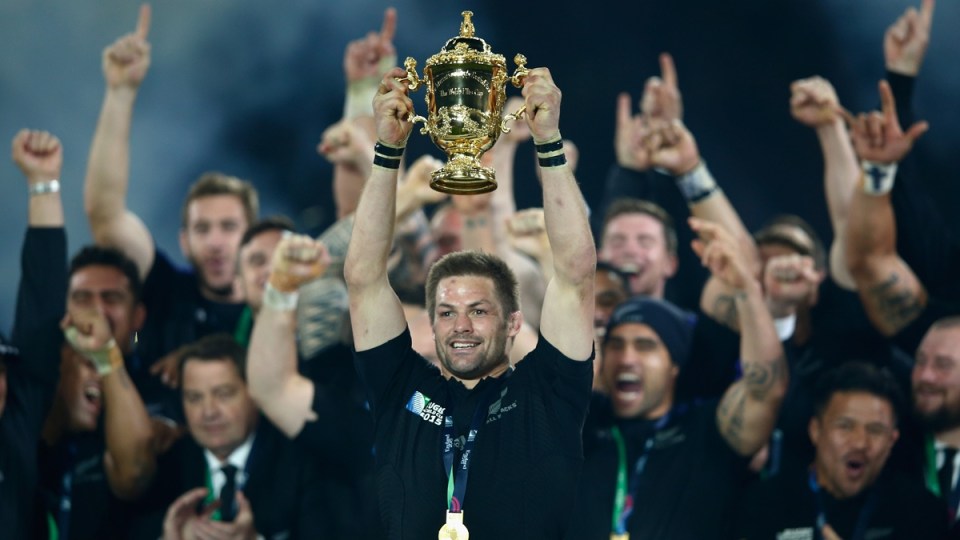 The All Blacks haven't been their usual selves lately, injecting uncertainty into their efforts to retain rugby's crown. Photo: Getty

It’s on! For the faithful, heaven has come to earth for six weeks of brilliant sport, courtesy of the Rugby World Cup in Japan. And it’s starting at a cracking pace with no less than four crucial matches this weekend.

This promises to be the most intriguing and open RWC since the great 2003 effort Australia hosted – that glorious sporting festival despite  England’s drop goal in the last minute of extra time to defeat the Wallabies.

New Zealand has won three of the eight cups, including the last two. The All Blacks justifiably start favourites, but they arguably look more beatable than in any previous tournament.

The invincibility mantle has been lost. In the last 12 months, the ABs have been defeated by Australia, Ireland and South African, drawn against South Africa, and only scrapped home by one point against England and four against Argentina.

Depending on the path to the final, that means Australia has a much better chance of grabbing its third title than anyone could have imagined a year ago.

But first there’s the little problem of getting to the final, starting with the Wallabies’ 2.45 pm (AEST) kick off against Fiji. With the harder task of Wales coming next weekend in our pool, there’s no room for a Fijian upset, hence Australia is fielding its A team.

Yet there are always upsets at the RWC, ranging from Japan beating South Africa in 2015 to France dispatching the ABs in 2009.

Straight after Oz v Fiji, France plays Argentina in a match that should decide who comes second in Pool C (behind England). If the Wallabies win their pool, that’s who we’ll meet in the knockout quarter final.

It would be very nice not to meet England in the quarters. The Poms have had the wood on us of late and have looked the biggest, fastest and fittest of the European teams in the final 20 minutes of the northern warmup matches.

So, if we beat Wales next weekend – not a certainty – um, what if France pulls off an upset over England?

Wanting to know what happens next is part of why we love the game.

Straight after France v Argentina, it’s the match of the round: NZ v South Africa.

The rugby rankings are of interest for passing the time in pub conversations, but they don’t really mean much. The reality is that the ABs and Springboks are presently the world’s two best teams, the Boks on the rise, the ABs unusually unsettled, with England looking most like number three.

A Kiwi colleague thought it was outrageous that the draw placed NZ and SA in the same pool, but it actually makes perfect sense. They meet, they then go off to face the best of the rest in the quarters and semis and then can potential face off again in the final – if they’re good enough.

The other game that counts this weekend is Ireland v Scotland tomorrow evening in Pool B.

The winner of this match will play the loser of NZ v SA in the quarter finals. Ireland has been only a little cheeky in suggesting they’d prefer to meet NZ than South Africa in the quarters, given the southern giants’ different styles of rugby.

But Ireland, everybody’s second team, has been missing the form that saw them beat the ABs 16– 9 in November. We’ll see.

As for the other games, hey, it’s rugby – it’s all great from the minnows to the giants.

breakaway combination is revived – and if the team has rediscovered how to kick with something near intelligence.

It should be an entertaining, hard game, with more great individual stories in the people taking the field than there is space to consider.

From this distant observer’s view, I would have liked Dane Haylett-Petty starting at 15 with Kurtley Beale coming off the bench as required. We’re blessed to have three first-class locks in the side, which should give us lineout superiority.

Pocock, aside from his total game, should make up for comparative lack of height with superior speed and defence than Salakai-Loto showed on a couple of important occasions this year. And here’s to the great challenge of playing Koroibete and Kerevi against their country of origin.

Rugby World Cup: Brace for the most exciting tournament since 2003