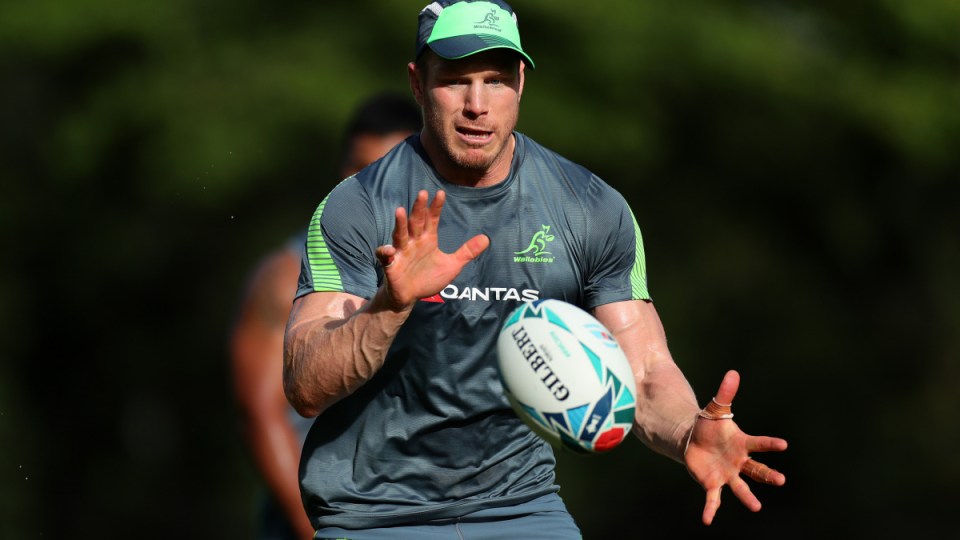 All eyes will be on David Pocock and his reunion with Michael Hooper for the opening clash with Fiji. Photo: Getty

Michael Cheika wants no surprises in Australia’s opening World Cup game which is why he is fielding the “Pooper” flanker combination against the dangerous Fiji.

The Wallabies will start their renowned openside mix of captain Michael Hooper and David Pocock for the 25th time in Saturday’s Test at the Sapporo Dome, in the only change to the XV who stunned the All Blacks in Perth last month.

Lukhan Salakai-Loto is demoted to the bench in a sour piece of news for the big blindside flanker on his 23rd birthday.

Coach Cheika insisted it was a tight call but said 31-year-old Pocock, attending his third World Cup, brings the mature qualities that might be needed if things start turning pear-shaped against a Fiji team stacked with attacking weapons.

“For the first game of the World Cup, I went for a little bit more experience, to be honest,” he said.

“They’ve done this before, the two boys playing together. We’ve worked on the possibility of this kind of combination for the last couple of weeks and they’ve been working well together.”

Cheika said the selection was no reflection on Salakaia-Loto, the only player to have appeared in all 400 minutes of Australian Test action this year.

The Queensland Reds enforcer stood out in the 47-26 demolition of the world champions in Perth and his absence could place pressure on a Wallabies lineout that has been functioning well.

Cheika said while there were obvious differences between the two, the nod to Pocock wasn’t simply because of his breakdown prowess.

“Rest assured, these players (Pocock and Hooper) aren’t selected just for their play on the ground.

“There’s a lot of other facets to the game where they can contribute to the team, both in attack and defence. And from an experience point of view as well.”

The other most contentious selection was the halves, where Nic White and Christian Lealiifano were again favoured over the 2015 World Cup pairing of Will Genia and Bernard Foley.

Cheika said “the ability to create, in attack and defence” made the difference in another difficult call.

Ten of the starting team are at their first World Cup.

It is the third for Pocock and fullback Kurtley Beale; and the second for outside centre JamesHooper, Hooper and prop Scott Sio. O’Connor’s previous appearance was at the 2011 tournament.