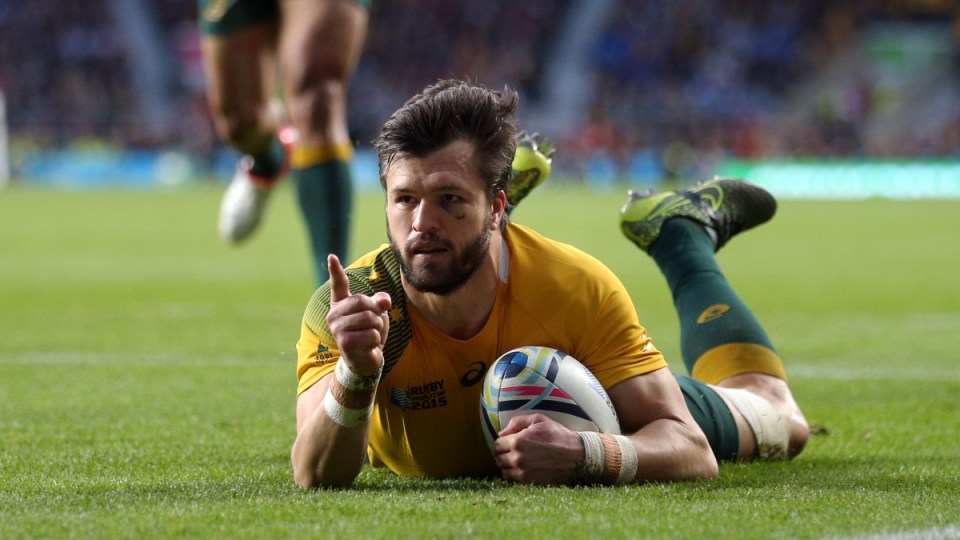 Evergreen Adam Ashley-Cooper and fledgling Jordan Petaia have bolted into the most experienced Australian squad yet named to contest a Rugby World Cup.

Two midfield backs at polar ends of their careers have been included in Michael Cheika’s 31-man squad unveiled in Sydney on Friday.

Ashley-Cooper, 35, becomes the oldest Wallaby selected for a World Cup and Petaia, at 19, the youngest.

Ashley-Cooper has played the third-most Wallabies Tests (118) and scored the third-most tries (37). He joins Will Genia as the only Australians to attend four editions of the global tournament.

It rewards the Waratahs veteran for his bold call to spurn the riches of Japanese club rugby this year to pursue another crack at the Webb Ellis Cup.

At the other end of the spectrum is uncapped Queensland Reds outside Petaia, a selection based on raw attacking potential.

Petaia suffered a serious foot injury in early March and has won selection on the back of recent club performances.

Twelve of the squad were involved in the 2015 campaign, when Cheika defied the odds by overseeing a trip to the Twickenham final, won by the All Blacks. Seven of those players were also at the 2011 tournament.

O’Connor is among a raft of midfield backs named by Cheika. Nine of his squad have started a Test at inside or outside centre, and Petaia is poised to become the 10th.

It has left other positions thin on numbers.

Cheika has gambled on just two specialist halfbacks, while only five loose forwards have been named, including veteran David Pocock who hasn’t played since March because of injury.

Among the unluckiest omissions are fullback Tom Banks, halfback Joe Powell, hooker Tatafu Polota-Nau and flankers Liam Wright and Luke Jones, who will all join the World Cup squad as train-on players at a 10-day preparation camp in New Caledonia.

At the campaign launch in Sydney, Cheika said selection competition had been fierce.

“It’s a positive headache in many ways, in having good options to pick the side,” he said.

“Part of this playing squad will always represent those (omitted) guys and all of the guys that have played with the Wallabies over the last four years as we lead into this final tournament.

“All of that preparation work counts and now it’s up to us to make it count.”

Sixth-ranked Australia’s erratic form of the last year, including a heavy win followed by a heavy loss to the All Blacks this month, was reflected by a guarded Hooper.

Asked how far the Wallabies could go in Japan, the flanker responded: “Look, we’re building. We’re all about building confidence and momentum.”

The Wallabies have a final hitout against Samoa in Sydney on September 7, a fortnight out from their opening group game against Fiji in Sapporo. The other pool opponents are Wales, Uruguay and Georgia. 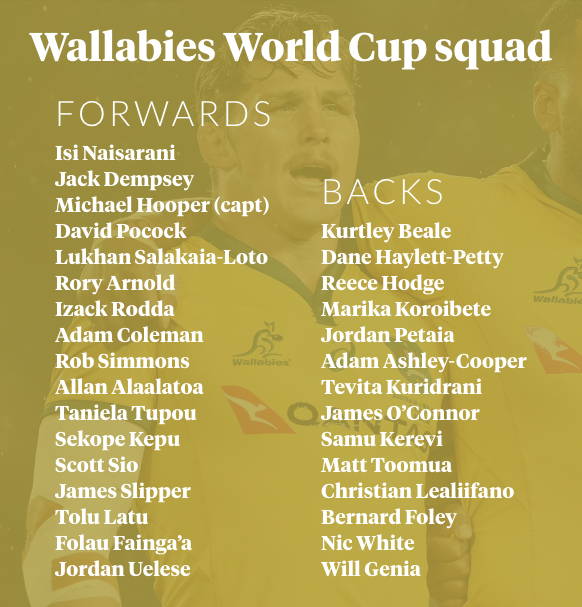