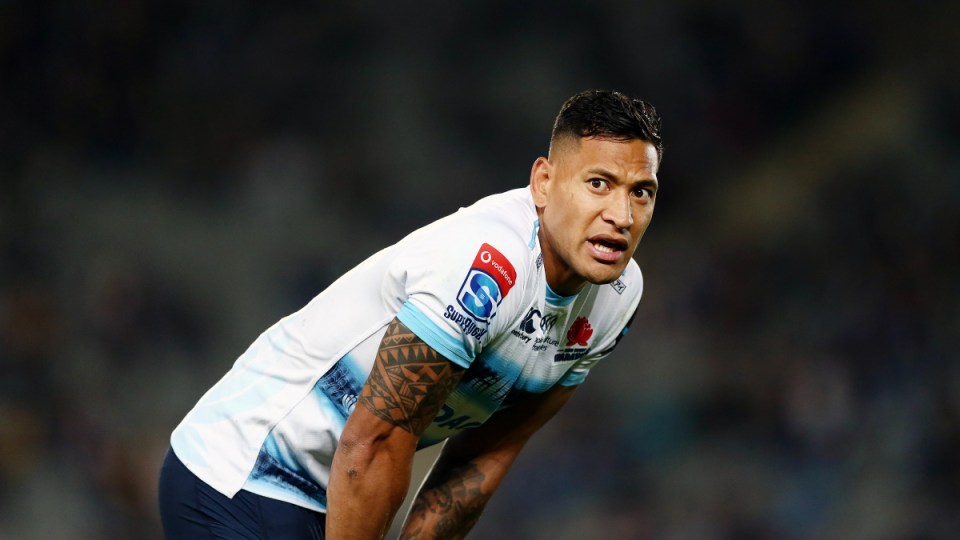 Israel Folau was given 48 hours to accept the sanction. Photo: Getty

Wallabies star Israel Folau has requested a code of conduct hearing over his breach notice from Rugby Australia as his multimillion-dollar contract hangs in the balance.

Unless he is successful at the hearing, Folau faces having his $4 million contract torn up after being issued with a “high-level” breach notice for controversial social media posts he made on April 10.

Rugby Australia says it will make arrangements with the Rugby Union Players’ Association to organise the hearing.

However, Folau may have to wait a while for his hearing. The Easter public holidays on Friday and next Monday and Anzac Day next Thursday, make it highly unlikely any hearing will be conducted until after April 29.

Rugby Australia served the Test and NSW Waratahs back with a breach notice on Monday for his homophobic posts on social media platforms last week.

The RA Integrity Unit deemed that Folau had committed a high-level breach of the Professional Players’ Code of Conduct warranting termination of his employment contract.

Folau, who signed his new four-year contract in February, was given 48 hours to accept the sanction or have the matter referred to a code of conduct hearing.

Former Wales international Gareth Thomas, who came out as gay in 2009, was among those to react.

“To everyone who reads it, don’t be influenced by his words. Be the better person and be you. Whoever you is, hell doesn’t await you. Happiness awaits you,” he said.

But Folau has also had some support, including from AFL stars Gary Ablett and Matt Kennedy, who were among 39,000 people to “like” the post.

On Wednesday, former Rugby League forward and boxer John Hopoate has came out swinging in the union player’s defence. In an expletive-riddled Facebook post, Hopoate urged anyone offended by the post to “toughen the F up”.

“Why’s everyone so worried about what Israel Folau said?” Hopoate wrote.

“It’s not like he’s murdered someone … I’ve been called racist names and all other crap all my life.”

Even if Folau is somehow cleared to return to playing, his future in the Wallabies looks grim. Earlier this week, Wallabies coach Michael Cheika said it would be hard to pick him for the team.

“As it stands right now … you wouldn’t be able to,” he said.

Wallabies captain Michael Hooper has also said it would be hard to take the field with his long-term teammate.

RA chief executive Raelene Castle has stressed the action against Folau is about the issue of the responsibilities of employee to their employer, rather than punishment for his religious beliefs.

Ms Castle said Folau was warned formally and repeatedly last year about expectations of his social media use as a Wallabies and Waratahs player. That followed previous controversial posts.

Ms Castle said Rugby Australia asserted that the gifted back had failed to meet those obligations.