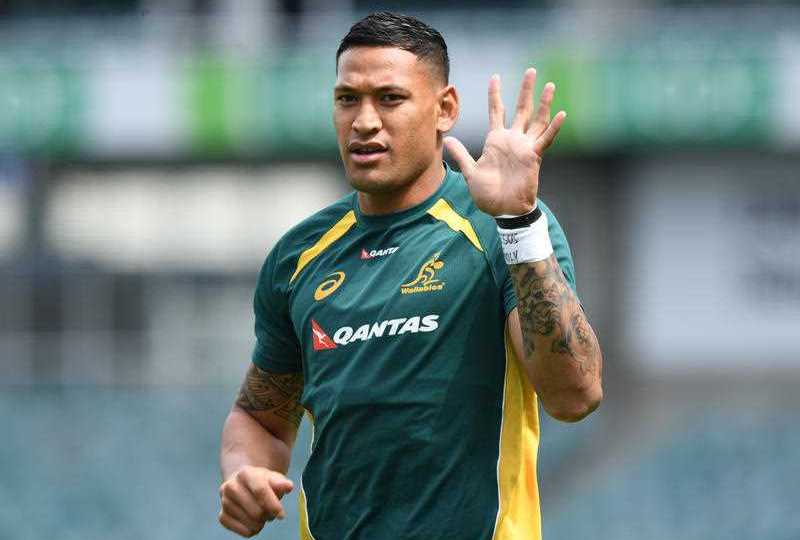 Israel Folau says he turned down a Rugby Australia deal that would have allowed him to play on. Photo: AAP

Israel Folau’s future in rugby is again in doubt following another pair of explosive online posts that insult a range of people from homosexuals to “fornicators” and drunks.

Rugby Australia released a statement condemning the comments by the former NRL and AFL star, who is a devout Christian, and now face a moral dilemma about Folau’s future in the sport just five months before the World Cup in June.

Folau is under contract until 2022, has won 73 caps and is a key part of Michael Cheika’s plans for the tournament in Japan.

“Folau’s comments are just one example of how much work is still left to do to combat discrimination and the use of hateful language against lesbian, gay, bi and trans people,” Kirsty Clarke, director of sport at Stonewall told PA Sport.

“It’s important that Rugby Australia have stepped up to challenge Folau’s abusive comments.

“The more players, fans, clubs and organisations that stand up for equality, the sooner we kick discrimination out and make sport everyone’s game.”

Former Wales international Gareth Thomas, who came out as gay in 2009, responded to Folau’s comments on Twitter.

“I don’t write this with hate or anger after Israel Folau’s comments. I write with sympathy,” the 44-year-old wrote.

“To everyone who reads it, don’t be influenced by his words. Be the better person and be YOU. Whoever YOU is..Hell doesn’t await YOU. Happiness awaits YOU.”

International Gay Rugby, the global organisation for the world’s gay and inclusive rugby clubs, also hit out at the 30-year-old.

“The effects these hateful comments will have on LGBT people are enormously harmful,” the organisation said in a statement:

“We want all LGBT athletes out there to know that rugby is a sport where you are welcome and respected, a sport of values that doesn’t allow for such bigotry or discrimination of any kind.

“We are taking a keen interest on the findings of Rugby Australia’s Integrity Unit when they meet tonight and applaud the union for taking the stance that these kinds of comments are unacceptable.”