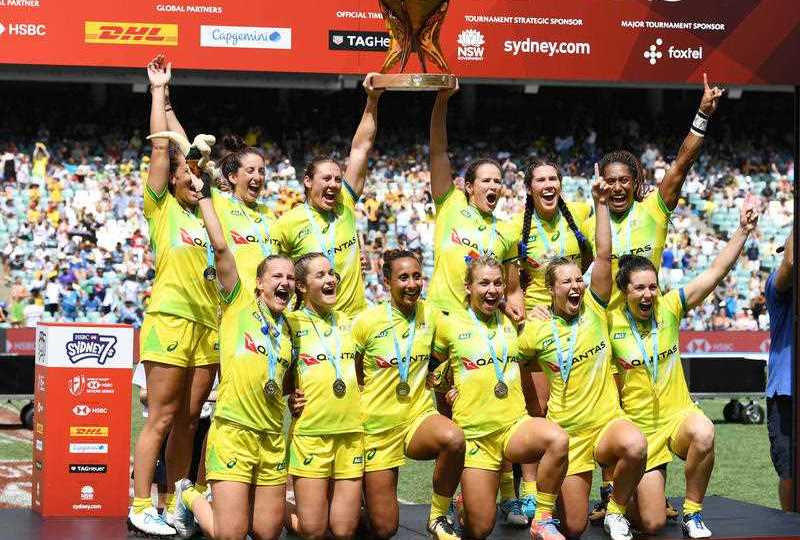 Australia poses for a photograph with the trophy after winning the women's Cup final against New Zealand. Photo: AAP

Australia will do its best to pick apart its history-making World Series performance with an eye to further domination in April’s Commonwealth Games.

The Olympic sevens champion breezed into the final and destroyed defending world champions New Zealand 31-0 to complete an Allianz Stadium romp in which it never conceded a point.

In six encounters in Sydney it tallied a staggering 213-0, with the grand final victory snapping Australia’s five-game losing streak against the Kiwis since the 2016 Olympic gold medal triumph.

And Australia’s win, which followed a similarly dominant round one title in Dubai, puts it 10 points clear of Canada, Russia and New Zealand on the series ladder on 40 points.

It means Australia is in the box seat to repeat its 2016 world championship, with just three rounds to play and only 20 points on offer for the winner.

Australian coach Tim Walsh said the team would reflect on its historic weekend, but only for a few days before focus turns to the Gold Coast Commonwealth Games (April 4-15). The next round of the women’s Sevens is in Kitakyushu, Japan, on April 21-22.

“Winning two from two (World Series legs) and playing some of the best rugby and clearly with the best defence we’ve ever had ranks pretty highly,” he said.

“We’ll celebrate tonight and then get back to work on Wednesday.”

Improving on such a dominant display will be hard, but the perfectionist said it was possible as he eyes his final tournament in charge of the side.

Walsh will step down as coach after the Commonwealth Games as part of a transition process aimed at the 2020 Olympics.

“With every play we have there is an option and you always hear bigger, faster, stronger,” the coach said.

“But we’re (trying to be) smarter, faster, stronger so we always have these options.

“Either myself or the girls (will be pointing out where improvements can be made).”

Rio gold medallist Shannon Parry said the win rivalled its Olympic success, but that the Commonwealth Games had the potential to provide another magical moment.

“To have family and friends in the crowd, to play on home soil, we don’t get to see that too often,” she said.

“(But) Comm Games, home soil – you don’t need much else to get yourselves up for that to be honest.”