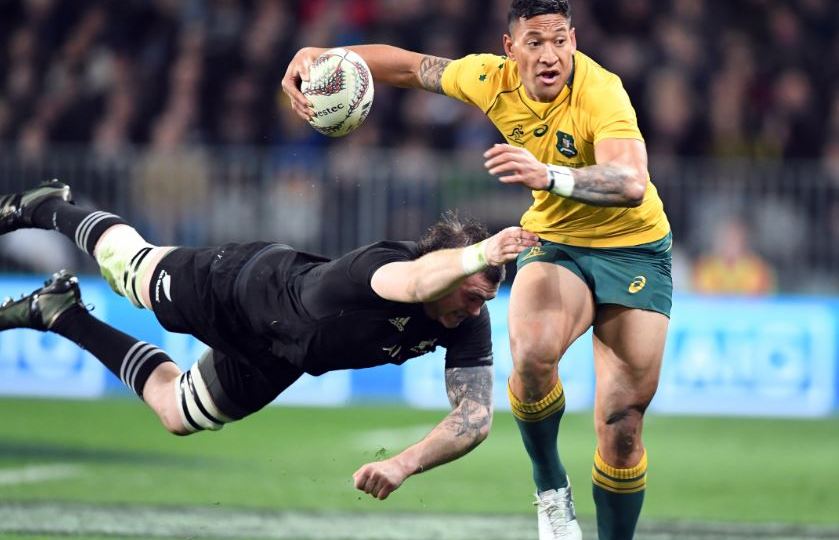 Just 27 seconds into the match, Israel Folau barrels through defenders to draw first blood for the Wallabies. AAP / Ross Setford

An indomitable New Zealand has retained the Bledisloe Cup by overcoming a vastly improved Australia to win 35-29 in a heart-stopping second Test on Saturday.

The All Blacks stole victory courtesy of a last-gasp Beauden Barrett try – assisted by a series of missed conversions that, if they had sailed through the uprights, would have sealed an historic and long-awaited Wallabies victory. The All Blacks’ Beauden Barrett shatters a fairytale ending with the last-minute try that sealed the Wallabies’ fate.would have sealed an historic and long-awaited Wallabies victory.

For Wallabies fans the closing minutes were a heartbreaker, as Kurtley Beale looked to have pinched it for Australia with just four minutes to go, leaping over the line for the team’s fifth.

But Barrett drove a dagger through the visitors’ hearts with a near-instant response to seal a dramatic series win — the 15th in a row for the All Blacks — with his second try of the night.

Australia twice came from behind but will live to regret not making the most of a dream start.

At one stage the Wallabies were 17-0 ahead, with Israel Folau scoring a 70m intercept try after just 27 seconds.

Australia would have been up 24-7 after half an hour had Foley not missed two conversion attempts and a penalty.

Instead, the visitors clung for dear life to a three-point lead at the interval, then lost their lead when Barrett barrelled over the line in the 63rd minute.

Foley missed another conversion minutes later after Will Genia crossed, hitting the upright for the third time to leave the door open for the world champions.

While the Wallabies kept on coming — helped by three New Zealand tries that were disallowed by television match official Rowan Kitt — they ultimately could not deny the hosts.

However, Australian supporters can take heart from a markedly better performance on the back of their first Test embarrassment in Sydney — and one that suggests the trans-Tasman rugby chasm is not as big as many believe.

The Wallabies’ defence was strong, their tackling was ferocious and their attitude was perfect. All that was missing was a winning score.

Yes, it was another loss, but there is now reason to be genuinely optimistic that the Wallabies fortunes are finally on the upswing.

Feisty but inaccurate Wallabies kick themselves out of the Bledisloe Cup