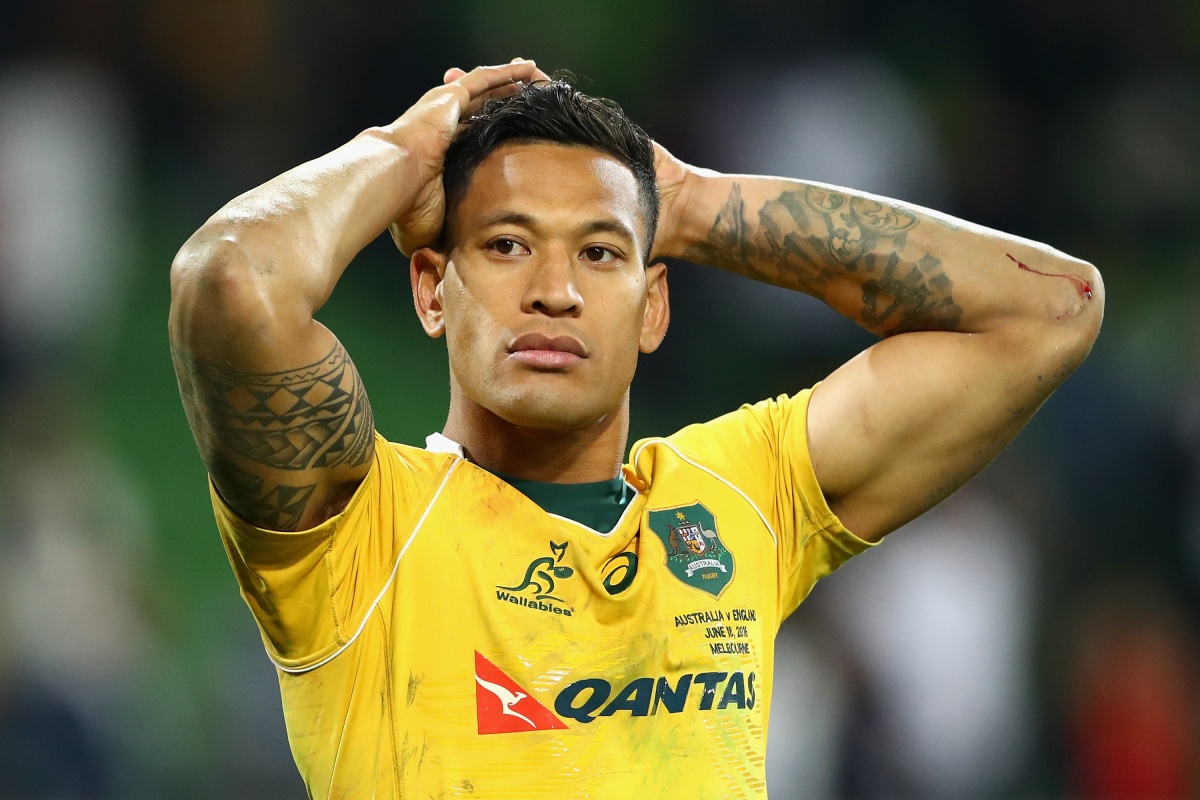 Israel Folau was sacked in May after inflammatory social media posts. Getty

A mudbowl of a pitch at Melbourne’s AAMI Park stadium, described as “embarrassing”, “disgraceful” and a “safety hazard”, has marred an otherwise thrilling international rugby encounter between England and Australia.

England won the match 23-7 after defending wave after wave of Wallaby assaults on their line during a thrilling second half.

A series of tactical mistakes and handling errors saw the Wallabies squander several scoring opportunities in the face of the gallant English defence.

While the exciting second half kept fans of both teams transfixed, all eyes were on one thing in the first half: the lacklustre pitch.

Each scrum turned the ground underfoot into a muddy crater, with turf lifting up under the pressure of the forwards’ boots.

Fans were furious at the shocking state of the pitch, which was so bad that ground staff were forced to enter the field of play to conduct running repairs.

As a result of the sandpit-like conditions, scrums were weakly contested by both sides for the duration of the match.

Referee Craig Joubert was forced to move scums away from ground that had been torn up during play. It’s not the first time the AAMI Park pitch has been criticised.

In fact the ground had been of such a poor standard throughout the Super Rugby season that Australian Rugby Union chief executive Bill Pulver sought assurances from stadium management that the issue would be resolved before the test.

Despite wet weather in Melbourne in the lead-up to the match, fans were unforgiving, taking to social media to condemn the “embarrassing” condition of the stadium.

Nick Lillystone was one of hundreds of rugby fans to voice their concerns on social media platform Twitter. “Australian rugby must be ashamed of that excuse for a pitch, it’s a disgrace and is dangerous,” he said.

Next door at the famous Melbourne Cricket ground, the pristine surface was left untouched by footballers from any code for the entire weekend, due to a split round in the AFL.

When asked why the match wasn’t shifted to the vacant surface at the MCG, Pulver said it was too late to move the match and rugby fans preferred to be closer to the action in a rectangular stadium.

Sing in the tail

The win secures victory in the three-test series for the visiting Englishmen, with one match left to play in Sydney at Allianz Stadium on June 25.

After being comprehensively beaten in the first two matches of the series, Wallabies vice-captain Michael Hooper paid tribute to the English defence.

He said the Australians were let down by their lack of consistency and handling errors.

At least a couple of Aussies enjoyed the victory.

The victory makes eight wins from eight matches for former Wallabies coach Eddie Jones, who took the helm of the English team after their disappointing World Cup performance in 2015.

Sitting next to him in the English coaching box is Wallabies legend Glen Ella.