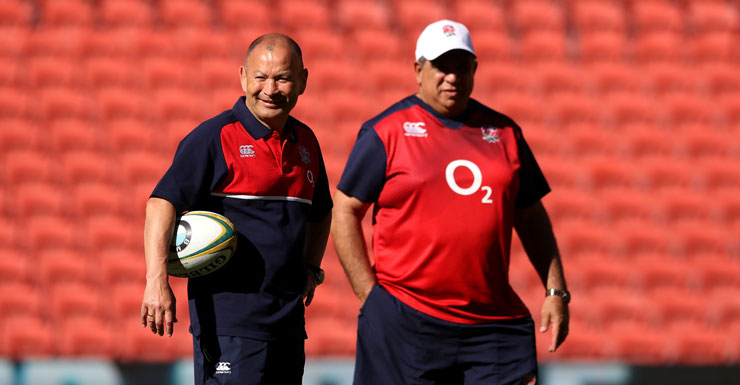 Two parts coach, one part salesman, one part agitator – Eddie Jones is doing it all.

The boss with the midas touch, Jones, fresh off guiding Japan to world rugby’s biggest ever surprise win at last year’s Rugby World Cup, against South Africa, is thriving with England.

And he’s doing it against us.

• Chris Gayle tells Mel: ‘You’re the one who looked bad’
• Why a women’s AFL competition is a win for equality
• Jason Day: I planned to quit after reaching world No.1

Jones, assisted by fellow Aussie Glen Ella, took over a side that was humiliated in October, bundled out of the World Cup that they hosted after the group stages.

They are now unbeaten in seven, and a 39-28 win over the Wallabies in Brisbane last week has set up a thrilling three-Test series against Michael Cheika’s Aussies, which continues in Melbourne on Saturday evening.

The enduring image from that first Test was not dejected Wallabies star David Pocock nursing a fractured eye socket.

It was the spontaneous, delighted embrace in the coaches box between Jones and his assistant, another legend from Sydney’s famous Randwick club, Ella.

It was an image that grated with Aussies.

Jones hasn’t made wholesale changes since taking charge but the difference in confidence and positive intent between then and now is stark. This has not occurred by accident.

England were never short on talent, only a diminutive ex-hooker from Randwick, to help them unlock their self-belief.

That Jones has sold that to his squad, improved them tactically, and still managed to front just about every media opportunity since his side arrived is a credit to him.

In the midst of AFL and NRL seasons, and an era in which the Wallabies just cannot win a Bledisloe Cup, he knew he had to press some buttons to generate additional column inches.

So that’s what he’s done.

He slapped down Fox Sports’ Stephen Hoiles – an ex-Wallaby himself – for his clumsy attempt at sexual innuendo around Ella and himself.

Then he suggested that the injury to Pocock, who will miss the rest of the series, wasn’t as bad as reported.

Throw in a lazy swipe at rugby league for its lack of skill and this was vintage Jones; up and about, chipping away at the home psyche.

It was certainly enough to get one of England’s finest on board, with actor John Cleese tweeting his thanks to Jones for standing up to the “nasty, jeering members of the Aussie sports media.”

The niggle-meter is twitching, on and off the field, and England are daring to believe that an unlikely series win in Australia is close.

By constantly fronting the media and shielding his players, Jones has deflected the attention away from the fact his side was exposed in defence in Brisbane, where they gave up four tries.

But it’s not about him

He’s had the luxury this week of quietly working on that, plus drawing more out of players like the prodigiously talented Maro Itoje, whose athleticism and ball skills are matched by his swagger.

One thing Jones has done is dead-bat suggestions that the three-Test series is as much about him and a personal battle with Chieka, the third ex-Randwick protagonist in this saga, as it is about results.

Indeed, in the excited aftermath of the Brisbane win, he remained gracious and humble, using a cricket analogy to explain how Australia’s opening blitzkrieg was like facing an express pace bowler, whose early deliveries are too quick, but eventually sees the batsman acclimatise.

To entirely focus on Jones’ words is not fair: he has drawn first blood in the tactical battle.

Pressure is now squarely on Cheika to change a game plan centred around the dual open-side threat of Pocock and Michael Hooper, to address a discipline issue which saw them give away far too many penalties in Brisbane, and to stiffen their wobbly set piece; a traditional area of strength for England.