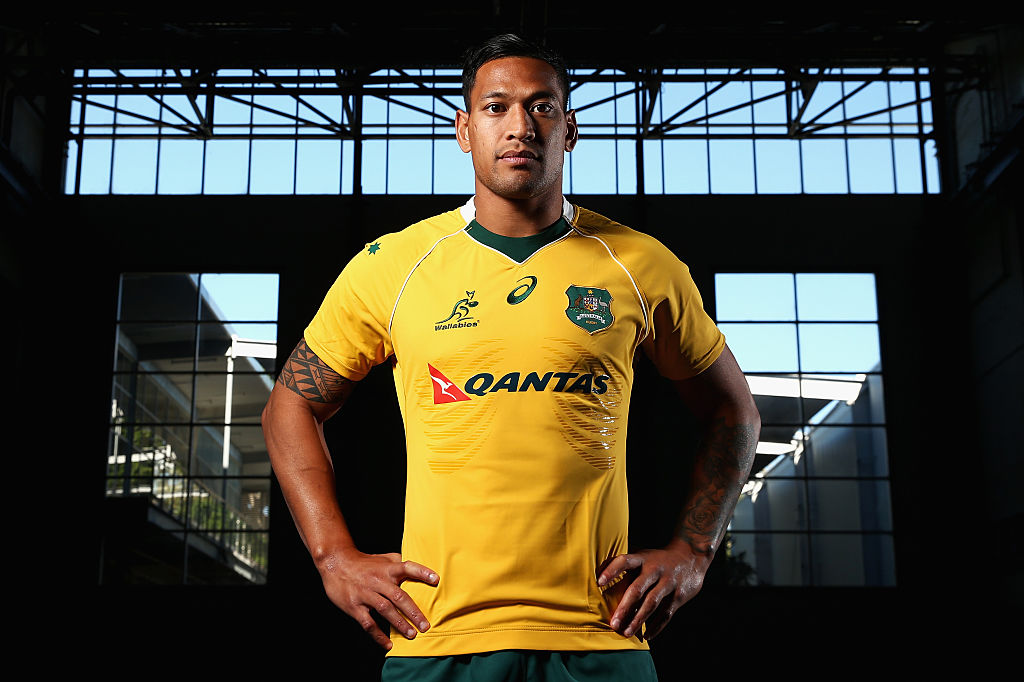 Israel Folau is under attack for his views on homosexuality. Photo: Getty

Folau had his best game since switching from fullback mid-season when he scorched the high-flying Chiefs with a two-try performance for the Waratahs that suggests he’ll present huge problems for England there in next month’s three-Test home series.

The 27-year-old had a hand in all six of the Tahs tries, but caught the eye with a stunning 90-metre intercept try and generally menaced the New Zealand franchise with his every touch.

Folau now leads the Super Rugby competition for metres gained, sits equal-second for carries, and is in the top six for defenders beaten, clean breaks and offloads.

But fellow code-hopper Hunt says it’s only a taste of what Folau can do as he comes to grips with his new role.

“I don’t know what his ceiling is. I wouldn’t put a ceiling on him, to be honest,” Hunt told AAP.

“I saw him grab that intercept and I was stunned.

“I watched his game the week before against the Crusaders and he was cutting them up to shreds.

“That’s what Izzy’s like, he’s a freak athlete. For him to be able to slot into 13 like he has is just a testament to how good a player he is.

“He’s going to be a handful for England, that’s for sure.”

Folau said the Chiefs game had been his best in the position but promised he still has more to give, having only played at No.13 for approximately half the season.

“There seemed to be a lot more opportunities. Things seem to be clicking a lot better,” he said.

“I’m pretty comfortable now and a bit more time will help me expand my game there.”

Coach Michael Cheika has been typically non-commital about where Folau will be deployed for the Wallabies, but it’s likely his sensational form in the midfield will force his hand.

The season-ending injury to Kurtley Beale means the Wallabies may boast a super-sized centre combination of Folau with either Tevita Kuridrani or Samu Kerevi, both also damaging ball runners.

It also means a new fullback will have to be found, with Western Froce’s Dane Haylett-Perry and Hunt the leading candidates.