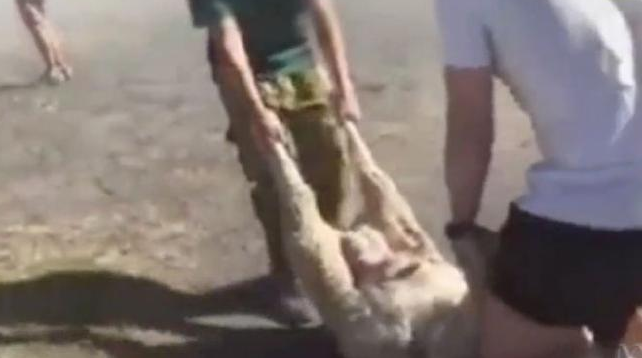 One of the nation’s oldest and most prestigious private schools is being investigated for animal cruelty after the ABC obtained videos of members of the school’s top rugby teams crash-tackling sheep in a farm paddock.

The King’s School in Parramatta helped pioneer rugby union in Australia and has produced dozens of Wallabies players.

But the videos obtained by the 7.30 program threaten to tarnish the school’s proud sporting history.

The footage was posted on a private Facebook page by school teacher and coach James Hilgendorf and a fellow former professional rugby player, Hugh Perrett.

After the ABC contacted the school on Wednesday, the private page was removed.

King’s School under investigation by the RSPCA after a rugby trip included a ‘ram tackling’ exercise. #abc730https://t.co/ebvjtnx8CG

The videos show the school’s first and second XV rugby teams running into a paddock, chasing and tackling young rams to the ground and dragging them to designated squares, where they are flipped over onto their backs.

The incident took place at a King’s old boy’s sheep farm in Orange, in central west NSW, during the April school holidays.

It has been condemned by farming and veterinary groups, while the school headmaster Dr Tim Hawkes backed away from his defence of the exercise, saying he is “appalled” by the incident.

In a statement, Dr Hawkes said: “Frankly, I was appalled at the decision taken to allow the training exercise involving the sheep to take place.

“Regardless of whether it was supervised, or that no animals or boys were harmed, it was totally inappropriate.”

“Innocent animals are potentially being harmed, if not injured,” he said.

“You’ve got young impressionable teenage boys who seemingly are under the direction of an adult who saw fit to film it. It’s subsequently been posted.

“To me that must smack of a level of acceptability about what was happening on that particular day, and from an RSPCA perspective, it’s completely, completely unnecessary, unreasonable and how anyone could justify that kind of behaviour is beyond me.”

Most farmers ‘would view video with horror’: Farmers Association

The NSW Farmer’s Association has also condemned the incident as dangerous and “plain stupid”.

Association president Derek Schoen told the ABC the boys were placed at significant risk of injury.

“This is unacceptable animal husbandry practice. You’d never treat your stock like that and I would say most concerned farmers would view that with a bit of horror,” Mr Schoen said.

“It’s distressing to the animals. It will make future husbandry practices more difficult with the animals – they’ll remember what has happened in those yards.

“A full-grown ram will be over 100 kilos and frequently when they’re shorn they’ll be sedated for the safety of shearers.

“So to have rams running around with a whole lot of school kids I think is just plain stupid.”

The Sheepmeat Council of Australia (SCA) said it was very disappointed by the footage, which clearly demonstrated inappropriate and irresponsible handling of sheep.

“The SCA condemns acts of cruelty towards livestock and supports all official investigations of alleged animal mistreatment incidents,” it said in a statement to the ABC.

“To ensure best practice in animal health and welfare, and personal safety, the SCA reminds the public and livestock producers that only trained and authorised industry professionals should handle commercial livestock.”

No boys or animals injured: King’s

Dr Hawkes declined to be interviewed about the videos but issued an initial statement to the ABC headed: “Ram Round Up Incident”.

“At the Camp, the boys did a number of team-work and strength-building exercises as well as improving their rugby skills,” it read.

“A strength and team-building exercise devised by the farmer involved the boys having to undertake a task not dissimilar to that undertaken by shearers.

“They had to go into a paddock, secure some rams and take them to an imaginary shearing point.

“The task was supervised closely by the farmer who gave instructions to the boys as to how this task should be done.

“Essentially, the task involved capturing a ram, putting the ram on its back and dragging it to a corner of a paddock.

“The two rugby coaches involved were assured by the farmer beforehand that the activity was safe and all the more so because he would be supervising it carefully.

“No animals were injured in the exercise. Neither were any boys.

“A record of the training was posted on a closed Facebook page so that the boys, and their families, had an account of what was generally considered to be a successful camp.

“I am satisfied that the activity was properly supervised and that no animals or boys were hurt.”

Dr Hawkes released an additional statement on Friday, which said that the school would not conduct similar exercises.

“When the activity became known to the school executive a few days ago, the feeling was that even though it was well intentioned and involved no harm to either boys or animals, it was a poor choice,” he said.

“There was also the capacity to bring the school into disrepute…I have directed that no training activities of this nature ever occur again.”

The RSPCA are investigating the incident.