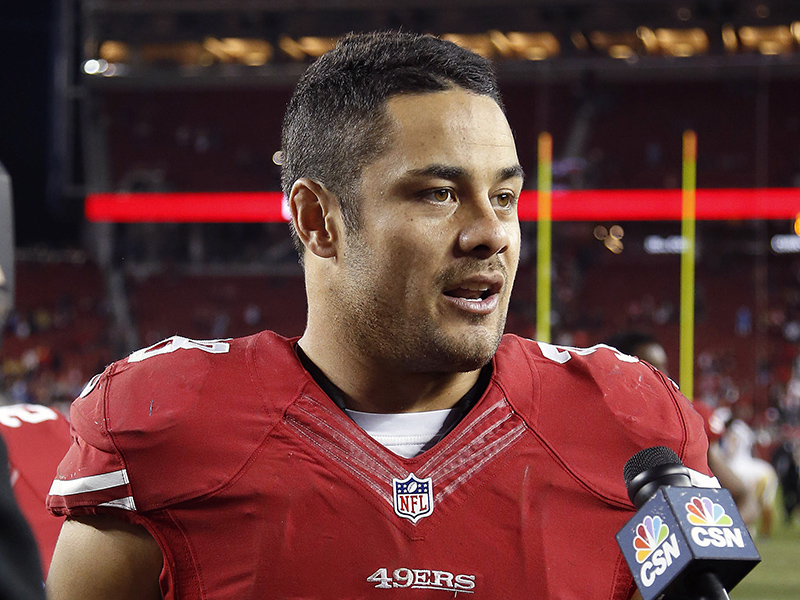 The "Hayne Plane" has signed a record deal with the Gold Coast. Photo: Getty

Jarryd Hayne said an offer to play for Fiji at the upcoming Olympic Games in Rio de Janeiro was too difficult to pass on.

As a result, Hayne announced his retirement from the NFL on Sunday after one season with the San Francisco 49ers.

A return to rugby league – and Australia’s NRL – seems likely once the Olympics is over.

“I am retiring from the NFL because the Fiji rugby sevens team reached out to me about the opportunity to join the team for the upcoming Olympics, and I simply could not pass that chance up,” Hayne said in a statement.

“The Olympics has been something I have admired since I was a little boy, and it is an opportunity I feel very similar to me joining the NFL.”

Hayne, who has represented Australia in rugby league, played for Fiji at the sport’s 2008 World Cup.

He was born and raised in Sydney but his father, ex-South Sydney back line star Manoa Thompson, was born in Fiji.

Hayne had spent recent months speaking of his desire to make his NFL dream a reality, despite being cut from San Francisco’s main squad.

After announcing his decision, Hayne said “the support and understanding from the 49ers organisation was unbelievable when I let them know about my decision to pursue another dream”.

“The past 12 months with the San Francisco 49ers have been absolutely incredible.

“I could not have predicted how far I have come as an NFL player. To not only be able to play in a game but also say that I started a game in the NFL is something that I will remember for a lifetime.”

Hayne originally signed with the 49ers as an undrafted free agent on March 3, 2015 and appeared in eight games last season.

“Jarryd is a tremendous example of what can happen when you commit to a goal and do everything in your power to make it a reality,” he said.

Hayne’s bid to play in the Olympics needs to be rubber-stamped though – first by World Rugby and then by the nation’s coach, Ben Ryam.

Former ASADA boss Richard Ings says anti-doping laws could stop Hayne in his tracks, adding that World Rugby rules require players to be in a registered testing pool for six months to be eligible to compete at sanctioned competitions.

And according to the former ASADA chief, Hayne’s stint in the NFL does not fit the requirements.

“If Jarryd Hayne had been playing in WADA compliant sport he would have grounds to reduce the 6 months,” Ings tweeted on Monday morning.

“But NFL is PED (performance-enhancing drugs) badlands. No chance.”

Ultimately, the decision on whether Hayne would be cleared to play will come down to the International Rugby Board, while the former NRL star could appeal any decision which goes against him.

But Ings believes the restriction is a vital one.

“The six-month return to competition rule is standard across most sports for athletes returning to international competition. And necessary,” Ings tweeted.

“The rule equally applies to reinstatement or to new players. Sensibly it must or any NFL player could bulk up and play.”

Fiji Rugby Sevens coach Ryan said Hayne did not have a guaranteed spot in the side.

‘No plans after the Olympics’

Hayne’s manager, Wayne Beavis, said on Monday that his client had not considered what he was going to do post-Olympics.

“We haven’t had a chance to talk about Plan B and I’m sure there will be no lack of opportunities for him should be come back to Australia and want to play rugby league again or rugby union,” Beavis told Triple M.

Hayne told Triple M in February that if he ever made a return to the NRL, he would want it to be with the Parramatta Eels.

“Like I always said, if I ever came back I’d go to ‘Parra’ if they wanted me,” he said.

“That was always something I said from the start. It’s funny when you see media outlets say I’m doing this and I’m doing that.”