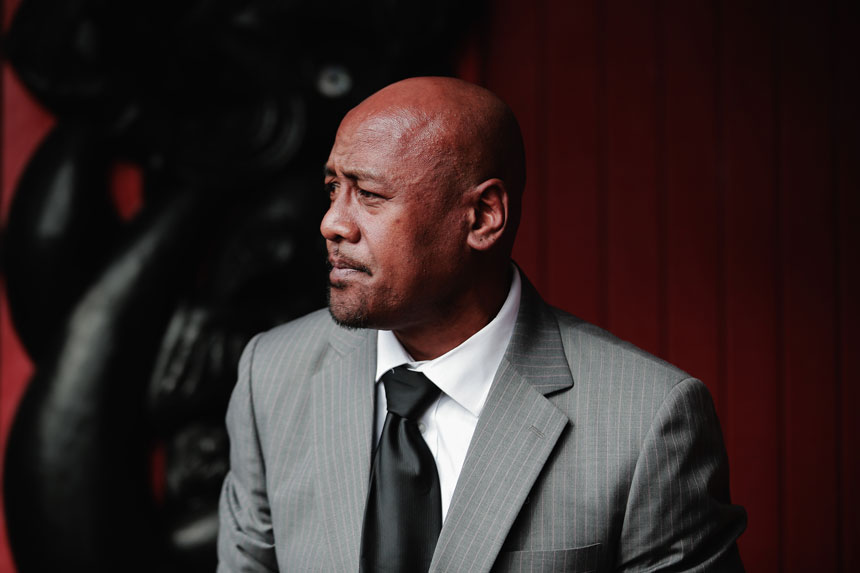 Less than three weeks ago, New Zealanders were basking in the euphoria of the All Blacks’ exhilarating, comprehensive World Cup triumph.

Today, a nation – and, indeed, the rugby world – is mourning one of its most beloved figures, the incomparable Jonah Lomu, aged 40.

Lomu was on hand to witness his compatriots’ emphatic victory at Twickenham, only returning to New Zealand from the UK with his family on Tuesday before passing away unexpectedly in Auckland on Wednesday morning.

The 73-Test All Blacks winger had battled kidney problems since 1995 when he was diagnosed with nephritic syndrome. Lomu underwent a kidney transplant in 2004 and has battled serious health problems since, but former All Blacks doctor John Mayhew, speaking on behalf on Lomu’s family, described his death as “totally unexpected”.

Lomu is survived by his wife, Nadene Quirk, and sons Brayley (6) and Dhyreille (5).

It is in some ways poetic that he lived to see quite possibly the greatest All Blacks team ever assembled covered in glory, for Lomu’s legacy towers over Rugby World Cup history – despite never grasping the Webb Ellis Trophy himself during a decorated career.

This year’s edition marked 20 years since Lomu exploded into the consciousness of sports fans globally in the South Africa-hosted tournament, producing a series of barnstorming displays that catapulted him to worldwide fame.

Lomu’s raw potential was recognised when he became the youngest All Blacks debutant ever at 19 years and 45 days against France in 1994.

Far from an automatic selection in the Test line-up, Lomu was picked in the ’95 World Cup squad and dominated the tournament with seven tries – including an unforgettable four-try haul in New Zealand’s semi-final thrashing of England.

The image of a 196cm and 115kg Lomu trampling hapless England fullback Mike Catt is ingrained in rugby folklore and remains arguably the most replayed sequence in the code’s history.

South Africa upset the All Blacks in the final a week later – largely thanks to the Springboks’ ability to shut down the wing goliath – but an international megastar was born.

Coinciding with the advent of rugby union professionalism, the youngster was a marketer’s dream: an inherently likeable, gentle giant off the field, and a freakishly talented, devastating proposition the likes of which the game had never seen on it.

Lomu swiftly transcended the realms of his sport in a similar manner to which Pelé, Muhammad Ali and Michael Jordan did theirs.

Privately confronting his health problems amid the blistering glare of the media spotlight, the shy and callow 20-year-old continued to grip the imagination of sports fans worldwide, though struggling with the attention his status drew.

A Super 12 title winner with the Blues and a powerful presence on the flank for Counties on the provincial scene when Test duties allowed, Lomu lit up the international scene again at the 1999 World Cup in the UK – in spite of another heartbreaking exit, this time at the hands of France in the semi-final.

He steamrolled his way over for a World Cup record eight tries for a career total of 15 five-pointers at the tournament, another unprecedented mark.

Switching to the Hurricanes Super Rugby franchise in 2000 after a year with the Chiefs, Lomu played on with the All Blacks until 2002 in the face of deteriorating health, finishing with a record of 37 Test tries in 63 appearances.

After receiving a kidney transplant, he made courageous – albeit short-lived – comebacks with European clubs Cardiff Blues (2005) and Marseille (2009).

The legend’s starring role in the 2011 RWC opening ceremony in Auckland was poignant for all New Zealanders; firstly for what he means to his fellow Kiwis as one of the most iconic sportspeople the country has produced, but more importantly for the monumental hurdles Lomu had overcome just to walk out onto the Eden Park pitch he had dominated on so many occasions as a player.

On the eve of the 2015 tournament, Lomu was unsurprisingly named as the greatest Rugby World Cup player ever by Britain’s The Guardian newspaper, while he again featured prominently in the promotion of the code’s centrepiece event.

Lomu was far from the complete player – his defensive and handling lapses made him a target, while his kicking game was virtually non-existent. But his peerless ability to beat an opponent with blinding pace, a brilliant swerve or raw power; his penchant for skittling defenders in heavy traffic or in open spaces out wide; and his innate finishing qualities saw him crowned the king of wingers.

His presence and aura instilled confidence in his teammates, while no player was as capable of turning the course of a game. The ultimate crowd-pleaser and a match-winner nonpareil.

Current wing hero Julian Savea – similar in dimensions, style and effectiveness – scored a blockbusting hat-trick of tries in the All Blacks’ quarter-final demolition of France last month that was quite rightly described as ‘Lomu-esque’.

But there will only ever be one Jonah. Amber Heard’s sister and friend give evidence
‘Should have been a penalty’: Boy crash-tackled by PM gives his verdict
Apple sued over ‘ear shattering’ AirPods alert
Russian Google to file for bankruptcy
Man arrested at NSW school for bestiality
Concern about COVID-19 deaths in aged care
Jonah Lomu dies at 40
Today's Stories

The enduring legacy of All Blacks legend Jonah Lomu