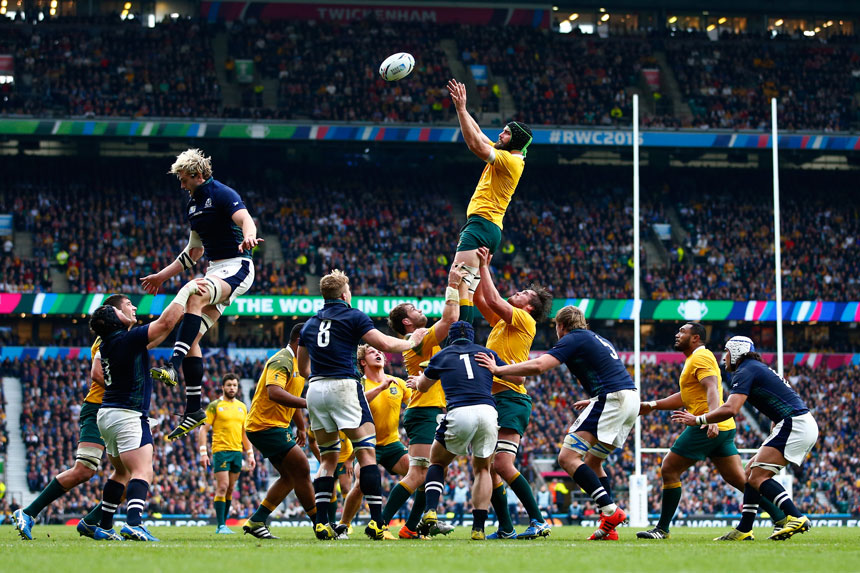 Australia went into the Rugby World Cup quarter-finals as the biggest favourites, widely expected to wipe the floor against a Scotland outfit that only scraped into the final eight via a narrow win over out-of-contention Samoa.

Instead, the Wallabies’ rousing ‘pool of death’ campaign – which included a blistering 20-point defeat of England and a heroic defensive display to subdue Wales – almost came to nothing.

Without the farcical yellow-carding of Scotland winger Sean Maitland early in the second half, and a dud penalty call in the dying minutes, Michael Cheika and co may well have been boarding a flight back home on Monday.

But instead of Foley’s nerves of steel, much of the focus has centred on the controversial penalty, given by South African whistleblower Craig Joubert.

The aftermath continues to reverberate around the rugby world with sympathy pouring in for the brave, unlucky Scots.

Meanwhile, Aussie fans may be wondering whether their watershed performances during the group stage were merely a false dawn.

Can the Wallabies seriously challenge the All Blacks, who obliterated France in their quarter-final in one of the most devastating Test performances of all time, should the trans-Tasman rivals meet in the decider?

Well, World Cup history has shown a tight, get-out-of-jail win can supply the impetus to make a run for the title, proving more beneficial than cruising all the way to the final without being legitimately tested.

Australia endured a similar quarter-final scare before surging to a maiden World Cup triumph in 1991, edging out Ireland 19-18 in an unforgettable clash in Dublin courtesy of a Michael Lynagh try at the death.

The Bob Dwyer-coached Wallabies used that nerve-jangling victory as a springboard to sweep aside heavyweights New Zealand and England on their way to hoisting the Webb Ellis Trophy for the first time.

Similarly, in 1995, hosts South Africa – competing in its first World Cup after apartheid laws were repealed in the Republic – held on for a 19-15 semi-final win over France at a rain-soaked Durban, benefitting from a wildly contentious no-try decision in the shadows of full-time.

The All Blacks, meanwhile, had decimated all opposition in a Jonah Lomu-inspired charge to the final.

It was the slugfest-hardened Springboks, however, that secured the title in an epic extra-time final, 15-12.

The Wallabies needed extra-time to win their 1999 semi-final against the Boks, 27-21, before blitzing France 35-12 in the final a week later.

The green-and-golds got away with another one-point win over Ireland during the 2003 pool phase and went on to stun the All Blacks 22-10 in the semis.

In contrast, New Zealand sailed through the group stage and knockout stages of the 2011 tournament without a hitch, winning all of its matches by 14 points or more in qualifying for the final.

And the All Blacks’ lack of a genuine challenge almost saw them crumble in the decider, eventually edging rank outsiders France 8-7 in a gripping contest.

The All Blacks are embarking on a similar rampage through this World Cup – setting a knockout match record with their 62-19 thrashing of France to reach the last four – and are on course to meet Australia in the final without having been pushed, although South Africa should prove a formidable opponent in the semis.

In-form Argentina also represents a new challenge for Australia this weekend, one the Wallabies won’t be taking lightly after the Pumas’ quarter-final rout of Ireland and their own near miss against the Scots.

It should also be remembered that injured superstars David Pocock and Israel Folau, who missed the quarter-final, are likely to be back on deck.

But more importantly, Australia’s gruelling win over Wales and their fortunate eclipse of Scotland hold them in good stead for the pressure-cooker of a World Cup final – if they get there – particularly against a fearsome foe like New Zealand or South Africa.

While the Wallabies’ last two outings have been well short of complete, all-round 80-minute performances, they’ve delivered in the clutch moments.

The Springboks will be looking to draw on those traits against the All Blacks this weekend, after snaring their semi-final berth via a 74th-minute try against Wales.

Slaughtering world-class opposition by a cricket score will always make you favourites with the bookies.

But possessing the ability to pull off a try-saving tackle, unlock a seemingly watertight defensive line or bury a pressure goal when a high-stakes game is on the line and your backs are against the wall, are the qualities shared by World Cup champions.

*Australia takes on Argentina at Twickenham at 3am AEDT on Monday. The lucky escape that could spur the Wallabies to glory