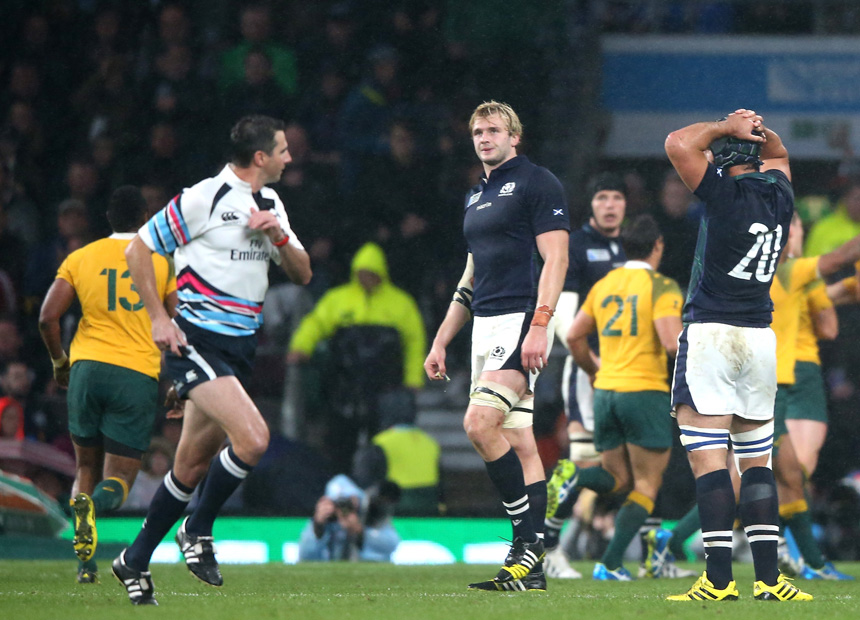 The last-minute penalty that helped the Wallabies clinch a World Cup quarter final victory over Scotland should not have been given, a review committee has said.

On Tuesday (AEDT), a World Rugby referee committee admitted it was the incorrect call.

• Wallabies sweating on key trio’s fitness ahead of semi
• Wallabies scrape past Scotland in a thriller
• ‘I know what you’ve done’: rugby spat turns ugly

The referee penalised Scotland’s Jon Welsh for playing the ball “following a knock-on by a team-mate, resulting in an offside,” read the committee’s statement.

“On review of all available angles, it is clear that after the knock-on, the ball was touched by Australia’s Nick Phipps and Law 11.3(c) states that a player can be put on-side by an opponent who intentionally plays the ball.

“The appropriate decision, therefore, should have been a scrum to Australia for the original knock-on.”

Mr Joubert had been widely pilloried in the game’s aftermath for making the decision.

He could be seen sprinting straight from the field after blowing the final whistle.

The six member committee, headed by former Scotland flanker John Jeffrey, stressed no foul play had been involved, so Joubert could not refer the incident to the third match official and a television replay.

“Despite this experience, Craig has been and remains a world-class referee and an important member of our team,” World Rugby referees chief Joel Jutge said.

On Monday, Wallabies’ coach Michael Cheika said the referee sprinting from the field was not evidence that he knew he had made the wrong call.

“Someone threw a bottle at him, didn’t he? I don’t think that’s funny,” Cheika said on Monday.

“If I saw a bottle being thrown at me, I’d be getting off [the field] as well.

“I don’t like [what] people are making out of the way he ran off the field.

“You’ve got to assess things for what they are. He is just a human being like you and I are.”