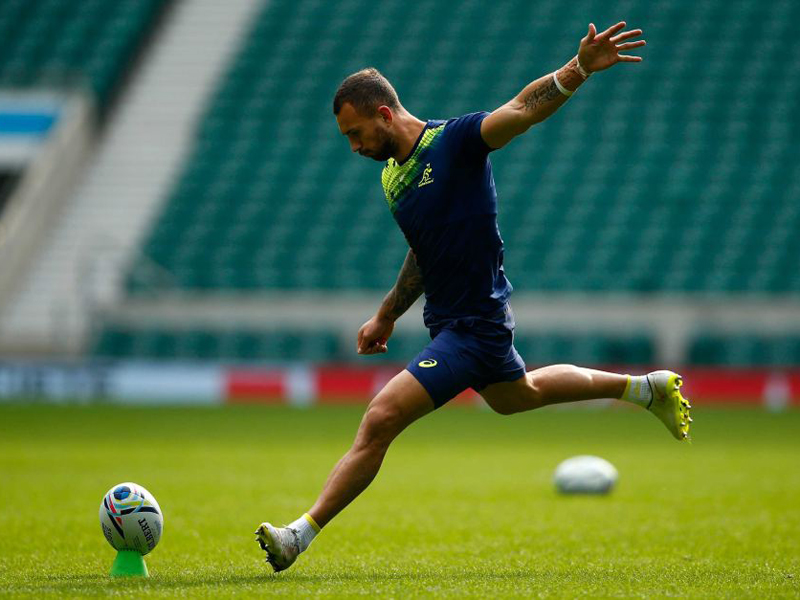 Quade Cooper has been left stunned by his late World Cup quarter-final call up which adds intrigue to his long-term future in Australian rugby.

The enigmatic playmaker, who received a last-minute reprieve prior to Friday’s team naming when star full-back Israel Folau succumbed to an ankle injury, is yet to commit to a deal beyond this year’s World Cup.

With Folau sidelined, Kurtley Beale has been promoted to the number 15 jersey and Cooper assumes his impact role on the bench against Scotland in the quarter-final at Twickenham on Monday morning (AEDT).

It had been rumoured the 27-year-old had signed a rich deal with French giants Toulon, only to renege and reportedly pay out the exit fee for that contract so that he can stay with Australian rugby with a view towards becoming an Olympian by playing rugby sevens.

The match against Scotland will mark his 59th Test for Australia, leaving him one shy of the 60-Test cut-off for overseas-based players to become eligible under recently revised ARU rules.

Post-World Cup, Cooper’s focus is believed to surround throwing himself into the 10 World Series Sevens tournaments to be played between December and May, so he can represent Australia at the Rio 2016 Olympic Games in August.

In the meantime, Cooper has spoken at length about playing every Test as if it is his last – which until Friday looked like may have been his blitzkrieg on Uruguay, in which he set up three tries in the 65-3 rout of their Pool A rivals.

He had missed out on bench spots in the subsequent victories over England and Wales as the Wallabies topped the “Group of Death”, but never gave up hope of again pulling on the gold jersey this campaign.

“We spoke about it as a squad, preparing like you are going to play,” said Cooper, who admits this is the latest call-up he had ever received.

“Even watching from the sidelines, I have been going through the game calling, even when I have been sitting in the stands, as if I was out there.

“Just to make sure I was ready if anything happened.

“In some ways you are still putting yourself in the position of playing, just to keep yourself ticking over.

“But at the same time you don’t want to put any negative energy out there and thinking someone will go down (injured).”

Cooper has been picked as cover for fly half and full-back, and hopes to have a similar impact to that of Beale – who has starred throughout the tournament and truly embraced the role as the team’s X-factor off the bench.

Beale’s versatility, having covered the wings already this tournament, should give further flexibility once Cooper takes the field – rather than simply covering for an injury to starting number 10 Bernard Foley, who has been one of the players of the tournament and is now one of the code’s more reliable kickers.

“If I get the opportunity I will step in there and bring what I have to the game,” Cooper said.

“I will just fit in where needed.”