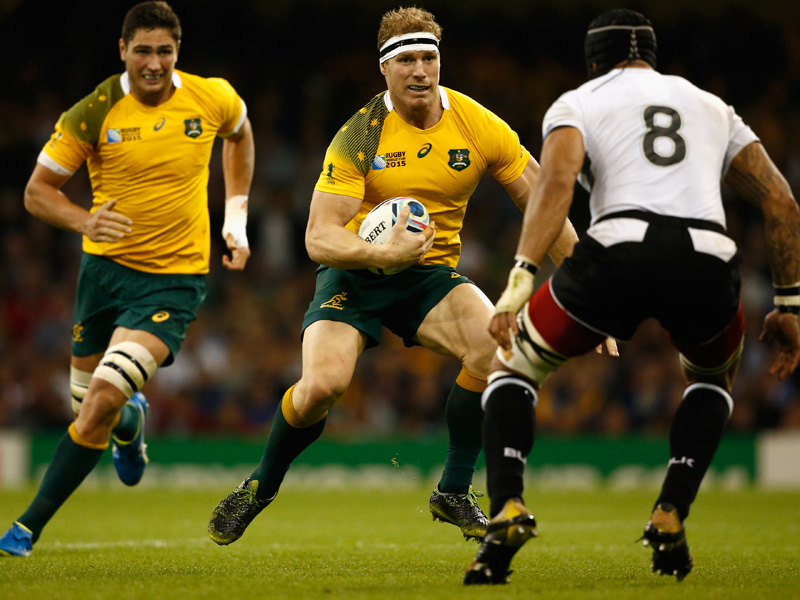 The star flanker had scans on his injured calf on Monday, but medical staff are confident it is not a tear, and coach Michael Cheika was in high spirits when asked about the 27-year-old’s chances of tackling Scotland in Monday’s (AEDT) quarter-final clash at Twickenham.

“With that guy’s mentality he could probably be ready tomorrow,” Cheika said. “We’ll just let it play out. We’ll let it follow it’s course with the medics and go from there.”

Star full-back Israel Folau is looking a more certain starter, with an ankle injury causing him less discomfort than at the same point last week.

Cheika was also pleased with the news Pocock would not face any disciplinary hearing this week – but admitted he had not seen the incident which lit up social media on Sunday.

A six-second video posted on Twitter showed Pocock held down in the ruck, before appearing to make contact with his right knee into the midriff of Wales hooker Scott Baldwin as he disentangled himself.

While no other camera angles were shown of the incident which would highlight the force of the alleged kneeing, Baldwin appeared affected by the contact and stayed on the ground for several phases of play before recovering.

It was, however, not picked up by the on-field match officials and Pocock was merely given a warning by the citing commissioner on Monday.

Scotland was not so lucky, with hooker Ross Ford and lock Jonny Gray both in danger of missing the quarter-final after being cited for dangerous tackles in its win over Samoa.

The pair will have a hearing in London on Tuesday morning.

Pocock’s warning equates to a yellow card, which means Pocock will walk a fine line should he encounter any more disciplinary trouble in the coming weeks – with three yellow cards resulting in a hearing and a likely ban.

However he is free to face Scotland, should he recover from his calf injury.

“That’s good (news). It goes in swings and roundabouts, those types of things,” said Cheika, who will welcome back Pocock’s back-row partner-in-crime Michael Hooper from a one-week ban.

“I personally feel that those things have been dealt with relatively well.

“There’s clear instructions. I think the referees on field are doing the same.

“They’re refereeing the tournament really well and clearly. Most things are getting picked up.”