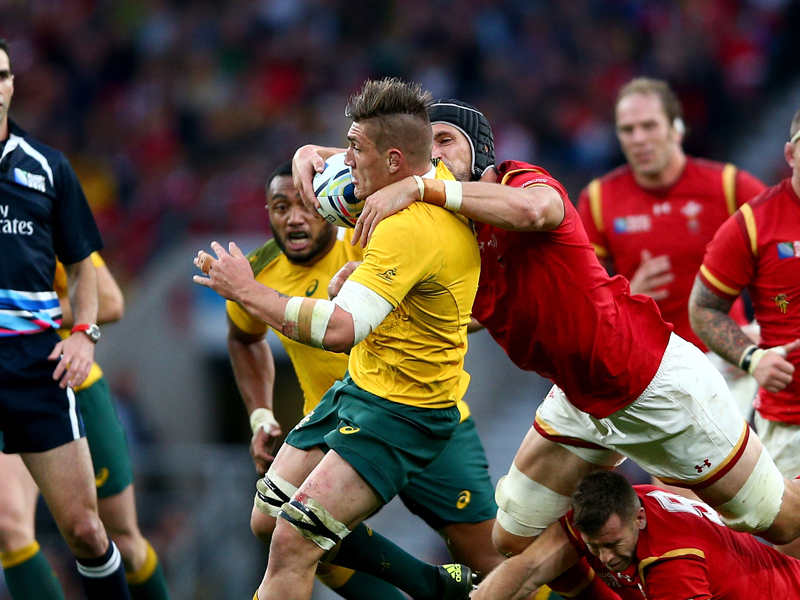 Extraordinary defence handed the Wallabies a 15-6 victory over Wales at Twickenham in their all-important Rugby World Cup clash, extending an 11-match winning streak over their Pool A rivals.

The Wallabies produced a defensive performance for the ages to deny a valiant Welsh outfit and did so with two players off the field during the second half, with half-back Will Genia and lock Dean Mumm sin-binned within three minutes of each other.

It was a gripping arm wrestle with the right boot of Bernard Foley proving decisive, the fly half contributing all of the Wallabies’ points through five penalty goals.

The victory may have come at a cost, however, with stars David Pocock and Israel Folau both picking up injuries, but it gives Michael Cheika’s men top spot in Pool A and the more desirable finals path with Scotland awaiting in the quarter finals.

During a remarkable seven-minute period in the second half, the Wallabies were reduced to 13 men and withstood wave after wave of Welsh attack, three times denying attacking raids by holding attackers up over the goal line.

“You don’t need many messages, just tackle your heart out,” Cheika said of the Wallabies’ defence.

“We made some mistakes and we’ve got so much improvement, but for our courage and the way we put our bodies on the line to defend, I’m very proud of the lads.”

Genia had cynically tackled his opposite Gareth Davies, who had taken a quick tap, before Mumm joined him on the sidelines after grabbing hold of Alun Wyn Jones in the line-out.

That’s one of the best wins I’ve been involved with.

Wales number eight Taulupe Faletau lost control of the ball as he crossed the line soon after Mumm’s sin-binning.

Even more impressive was reserve back rower Ben McCalman’s effort to deny a rampaging George North, who had been ankle tapped by Foley in the lead-up.

The powerful-running centre was held up by McCalman over the line in a show of strength that kept the Wallabies on top.

The match was all but secured when veteran winger Adam Ashley-Cooper rushed out of the line to shut down another Welsh raid, helping force a turnover.

“That’s one of the best wins I’ve been involved with,” Wallabies captain Stephen Moore said.

“We had to defend with 13 men for a long period down our end and I’m really proud with how we stuck in for each other.

Wallabies tame Wales at the breakdown

With both teams effectively deploying two openside flankers in their starting XVs, the contest at the breakdown proved pivotal.

But the phenomenal work of number eight Pocock, as well as openside flanker Sean McMahon, who stepped in for suspended vice-captain Michael Hooper, ensured the Wallabies enjoyed continued success in that area.

Pocock left the contest with 20 minutes to play after twice getting medical attention over a calf complaint, while Folau had to overcome a rolled ankle to take the field and also needed attention as the match went on.

The Wallabies absorbed a mountain of early pressure, with Wales enjoying 79 per cent possession in the opening 20 minutes.

But as possession evened up, the Wallabies began to emerge the stronger and took a 9-6 half-time lead, thanks to another perfect display with the boot from Foley, who kicked three penalties.

A week after dominating England, the Wallabies’ scrum again held firm after early challenges and won two first-half penalties to assert its dominance.

Cheika was able to breathe easier in the final moments when Wales winger Alex Cuthbert was sin-binned in the 78th minute for a deliberate knock-down of a long cut-out pass.