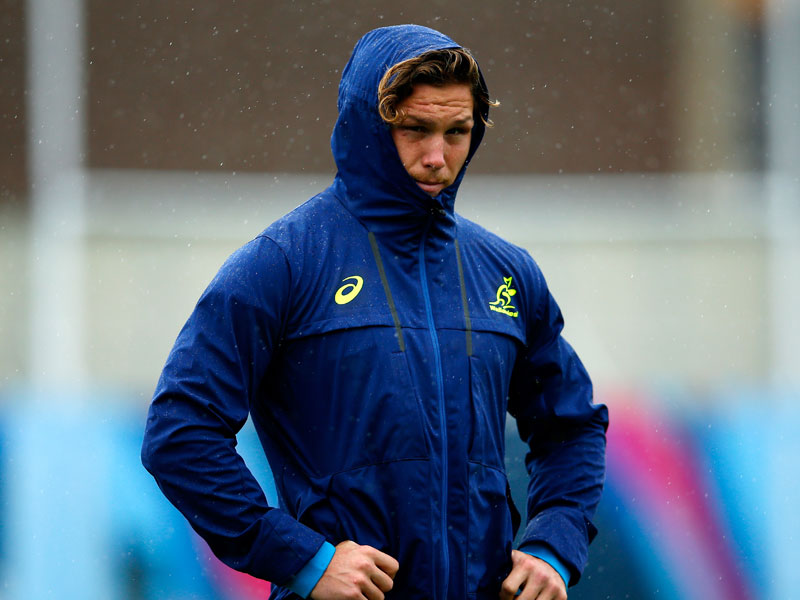 Wallabies coach Michael Cheika faces a backline crisis with up to three first-choice backs struggling to be fit for this weekend’s crunch Rugby World Cup clash with Wales.

Cheika will also have to decide on a replacement for suspended vice-captain Michael Hooper for the important final pool match on Saturday (0245 AEDT Sunday).

The game will decide who tops Pool A and earns the easier knockout schedule, which will include avoiding defending champions New Zealand until a potential final.

But at the forefront of his concerns ahead of Thursday’s team naming is the fitness of superstar fullback Israel Folau (ankle), tough winger Rob Horne (shoulder) and veteran centre Matt Giteau (ribs).

Horne is no chance after dislocating his shoulder in Saturday’s win over England, although Cheika will be keen to have him back for the business end of the tournament and does not need to seek a replacement as he has a surfeit of wingers in his squad.

Folau failed to train this week, while Giteau did limited work on Tuesday, before players enjoyed a day off on Wednesday.

Midfield maestro Giteau is considered the most likely of the three to take the field but is still feeling the effects of an off-the-ball, no-arms hit by England five-eighth Owen Farrell, which earned him a yellow card.

Defensive coach Nathan Grey joked that, like 31-year-old teammate Adam Ashley-Cooper, the oldest member of the Wallabies’ squad simply used every chance he could to escape Cheika’s brutal training sessions.

“I’m pretty sure he’s going to be fine. He plays the (Adam) Ashley-Cooper over-30 card,” Grey said.

Kurtley Beale looms as the major beneficiary of the growing casualty ward following his superb cameo off the bench against England, while winger Drew Mitchell and utility Matt Toomua are also in line for promotions.

The enigmatic playmaker would slot straight into Folau’s No.15 jersey should his ankle injury not recover in time.

“When KB is on the field and he’s got his hands on the ball, he’s a creative player.

“He can set guys up and put them away and also use his own speed to capitalise on defensive errors.

“He’s not Israel and Israel is not KB.”

Should they earn promotions to the starting line-up, Australia would need to then find bench replacements – with Quade Cooper and Henry Speight favoured.

In the forwards, Hooper will be replaced by Ben McCalman or Sean McMahon, with the other to be picked on the bench.

Should McMahon take his place, it will be a straight swap, while McCalman would be more likely to start at No.8, allowing David Pocock to resume his natural spot at openside flanker.

McCalman might just have the edge, having been picked on the bench for the England game, although Cheika is known to have an enormous opinion of McMahon.

“(McMahon) was here on his first Wallaby tour last year and we saw from the outset the guy was really up for it, really keen to get in and show what he’s worth,” Hooper said.

“Someone like Ben McCalman had a fantastic spring tour last year and again is impressing everyone when he’s on the field recently.”

Regardless, he had complete confidence either of the duo would slot seamlessly into the starting line-up.

“There’s certainly a lot of guys who, if they get the nod, will do a fantastic job,” he said.

“And if I can help prepare them going into this week, I’ll be trying my best to do that.”