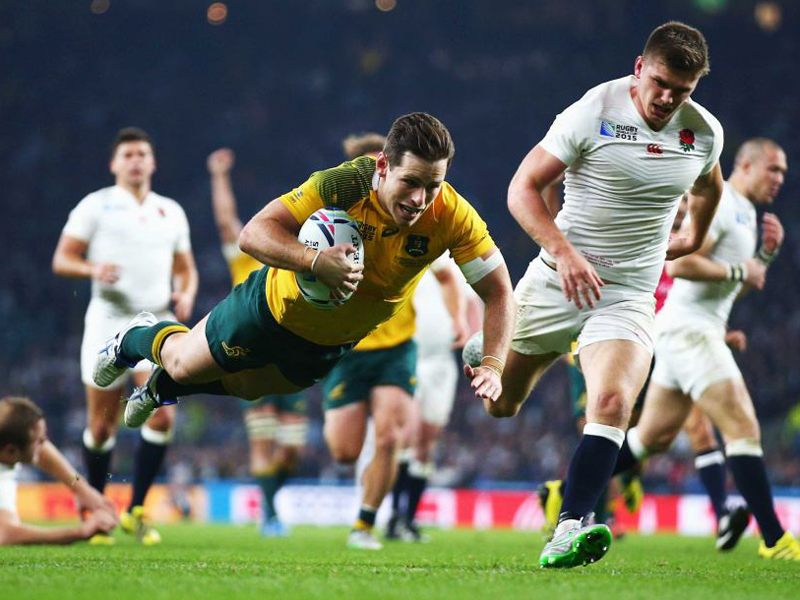 The Wallabies have qualified for the World Cup quarter-finals and eliminated one of their main rivals for the title with a dramatic 33-13 win over England at Twickenham.

Perceived weaknesses at the set piece did not materialise for Michael Cheika’s side, as the Wallabies raced to a 17-3 half-time lead.

The second half saw a more determined England outfit, with Anthony Watson crossing for a 55th minute try to bring the team in white right back into the contest.

England applied the pressure but the crucial moment came with 10 minutes remaining when Owen Farrell was yellow-carded for a high shot off the ball on Matt Giteau, allowing Foley to add three more points and put the Wallabies out of reach.

England becomes the first host to be eliminated in the group phase of a World Cup having earlier lost to Pool D rivals Wales. It was also the first time England failed to progress from the group phase.

In the lead-up to the match, former England manager Clive Woodward said Australia was “not the brightest” while former star Danny Cipriani added that no Australian would get in the England team.

“Mr Woodward’s right, I only got 300 out of 500 in my high-school certificate,” said Cheika, who has earned a fortune in the clothing industry as well as becoming an acclaimed rugby coach.

“My mother wasn’t happy with the results, I can assure you. She begged me to study harder. But somehow I got through, I don’t know how – fluked it, I suppose,” he addedAustralia and Wales will now play off for top spot in the group, though both are assured of a spot in the knock-out phases.