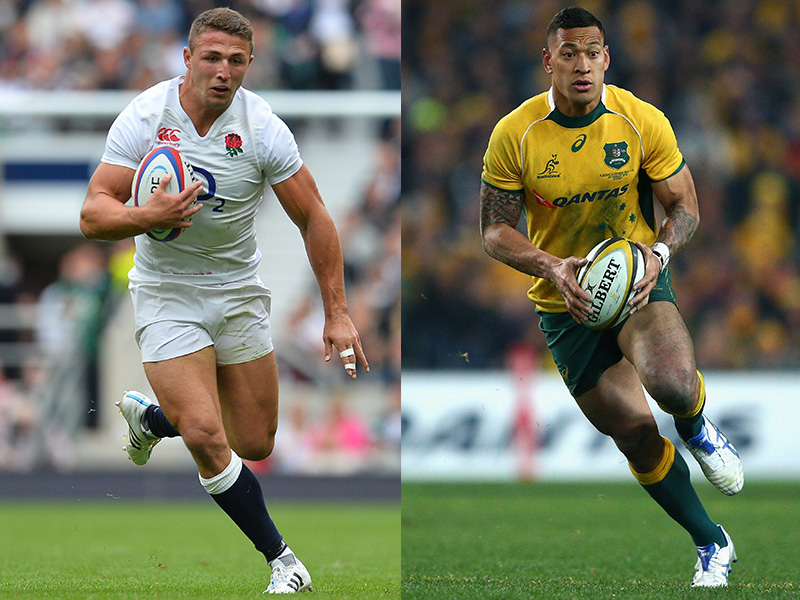 It’s the Rugby Union World Cup, but you could be forgiven for thinking this weekend’s England vs Australia match was a different football code altogether.

Folau is the three-sport star, the man who conquered the NRL and State of Origin before his big-money move to AFL.

While the Minto magician’s time at Greater Western Sydney AFL club might have not been as smooth as he would have liked, Folau has wasted little time in becoming a success in rugby union.

He won a Super Rugby title with the Waratahs in 2014, a Rugby Championship with the Wallabies this year and is now at his first World Cup. In just three years he has become one of the most devastating fullbacks in the world.

Sam Burgess, on the other hand, was a Super League sensation in England before he headed to Australia, lured by Russell Crowe, to test himself against the best in the NRL. He quickly became one of the most feared forwards in the competition.

In 2014 the Englishman famously led the South Sydney Rabbitohs to victory, ending a 43-year premiership drought. He played through the NRL grand final with a broken cheekbone.

Burgess surprised many when he returned to England and crossed codes. He has since been fast-tracked into the England rugby union team.

The two former rugby league stars are destined to meet on Sunday morning (AEDT) as Australia and England clash in one of the most important rugby union tests, easily the Wallabies’ biggest match, for some time.

Each need a win to guarantee a path to the quarter-finals. After their defeat to Wales, if the hosts England lose they are virtually eliminated.

Folau is the Wallabies’s key man. He’s tall, fast and powerful with the ability to beat defenders with speed, strength or footwork as well as being able to create opportunities for teammates.

Burgess is England’s most controversial selection – with little time at inside centre for club or country, he has been thrust into the international spotlight at the World Cup.

His world-class ability in rugby league is not in doubt, but he has yet to fully demonstrate his prowess in the 15-man code.

The pair of special 26-year-olds are at the centre of a host of rugby league connections crossing paths in this encounter.

Wallaby coach Michael Cheika is a fan of the 13-man sport and an old South Sydney supporter no less.

A number of Wallabies played league prominently as juniors including Will Skelton, Will Genia, Quade Cooper, Tevita Kuridrani, Kurtley Beale and Kane Douglas.

Cooper has been linked with a switch to the NRL in the past, as has Beale, while Douglas’ older brother Luke plays for NRL side the Gold Coast Titans.

Matt Giteau’s father Ron played in the 70s and 80s for the Magpies, Roosters and Raiders, while Joe Tomane was a high school teammate of Folau’s and played in the NRL with both the Titans and Melbourne Storm.

England has its own share of league links. Their defence coach is league legend Andy Farrell while his son Owen is their five-eighth. His rival for the 10 jumper, George Ford, is the son of another English league icon in Mike Ford. Both grew up playing rugby league in Wigan.

Rugby league stars crossing to rugby union is not uncommon, as you can see by Sonny Bill Williams’s switch to the All Blacks and the moves of trio Wendell Sailor, Matt Rogers and Lote Tuqiri over a decade ago.

But rarely has such a big game containing so many cross-code subplots, piqued so much interest.

All eyes will be on Folau and Burgess come Sunday morning.

The L-word will be on everyone’s lips