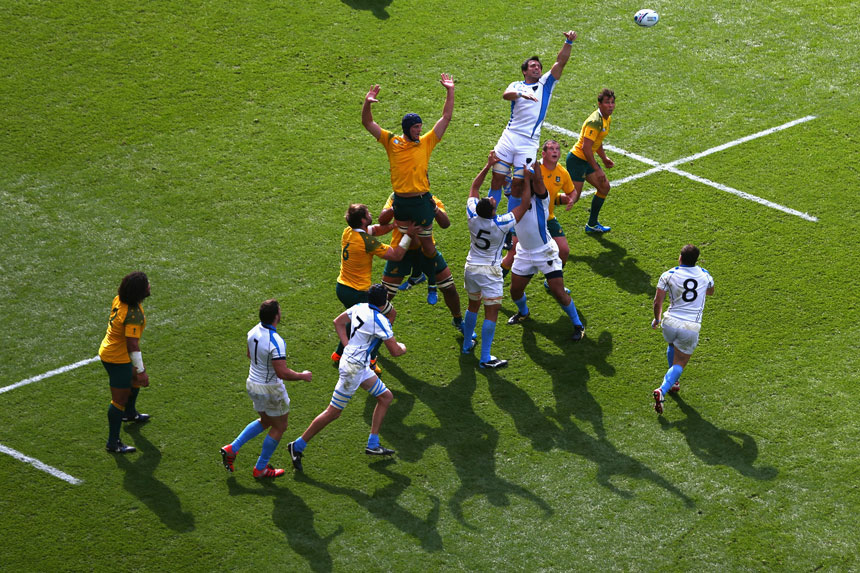 The Wallabies racked up a dominant victory over Uruguay on Sunday – but faced a stern warning from coach Michael Cheika that it wouldn’t be good enough in their vital showdown with England next weekend.

Sunday’s final scoreline of 65-3 eclipsed New Zealand’s 58-14 thrashing of Namibia as the biggest victory of the tournament so far, but their 19 handling errors concerned the coach.

Despite that, the No.2-ranked nation had absolutely no trouble putting Uruguay to the sword in an 11-tries-to-none belting – with doubles from Drew Mitchell, Ben McCalman and Sean McMahon.

By the 31st minute the Wallabies had secured the all-important bonus point, but coach Michael Cheika wasn’t thrilled with all of the action.

Certainly, more polish will be needed next Saturday in the all-important clash with England at Twickenham.

“We’re looking at our game to see how we can improve,” Cheika said.

“Let’s be honest, we’re going to have to if we want to compete against England.

“There are a few players that definitely put their hands up for selection, there’s no doubt about that.”

England would be consigned to a pool exit with a loss – but Australia’s chances of reaching the quarter-finals would also take a significant hit with defeat.

Cheika was adamant his team wouldn’t be relying on results going their way to ensure they process to the knock-out stages – sticking to the philosophy that four wins in the pool stages is the Wallabies’ only focus.

“No one’s won the World Cup unless they’ve won every game,” he said.

“I’ve never been here before but I figured that’s what you’ve sort of got to do.

“I’m not being a smart-alec, our plan is not to just scrounge through, we’ve got to just play well every game and let the results take care of themselves.

“We’re not sitting in front of the TV barracking for one team or the other.

“We are making assessments and looking at how we can improve our own game because let’s be honest, we’re going to have to improve from the first two matches to be able to compete with England.”

Unsurprisingly, the Wallabies were utterly dominant at the breakdown and it led to an avalanche of tries against the semi-professional Uruguayan outfit, who have never beaten a tier-one nation.

After just five minutes, young tyro McMahon opened the scoring when he finished off a rolling maul en route to a man-of-the-match performance.

While Nick Phipps impressed with his energy and crisp passing, halves partner Quade Cooper endured a mixed afternoon in his audition to hold onto the No.10 jersey deeper into the tournament.

The mercurial playmaker, having regathered a Beale midfield grubber, produced a superb flick pass for Joe Tomane to cross for the Wallabies’ second try – just one of a handful of magnificent plays which ignited the Wallaby backline.

However, the 27-year-old reprised his villain role soon after when he was sin-binned for tackling Uruguayan No.9 Agustin Ormaechea high and then body-slamming him into the turf.