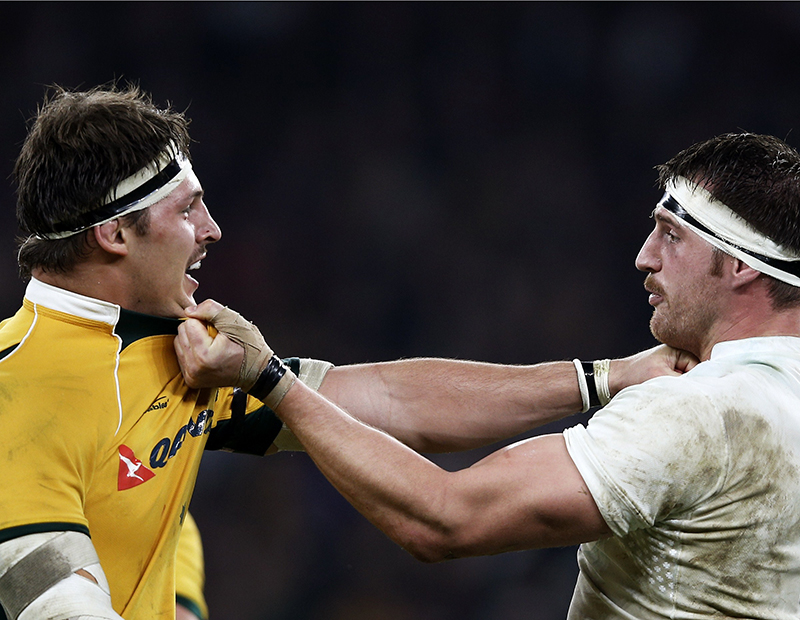 The Wallabies have completed their worst European tour in almost a decade after being overpowered by England 26-17 in their season-ending Test at Twickenham.

Australia fought hard in a classic two-tries-apiece encounter played in front of more than 82,031 fans on Saturday but the dominance of England’s almighty scrum proved too much to handle.

• Roar, Glory play out a draw in A-League
• Adam Scott in contention for Open title
• In Pictures: we remember Phillip Hughes

England No.8 Ben Morgan scored tries in either half, with both coming on the back of attacking scrums with the home side’s backs capitalising on their forwards’ dominance with a smart kicking game.

Wallabies coach Michael Cheika had played down the significance of England’s set-piece prior to the match but it remains a serious area of concern ahead of the sides meeting in the group stage at next year’s World Cup.

Cheika, who took the job only three days before the tour, now heads into a World Cup year trying to reverse the fortunes of an Australia side which have lost six of their past seven Tests.

As in last week’s three-point defeat to Ireland, there were many positives for Australia, who were willing to run the ball from everywhere on the field with centre Matt Toomua again impressive and skipper Michael Hooper typically giving his all.

The Wallabies’ tries came through five-eighth Bernard Foley and substitute Will Skelton but the defeat means they’ve lost three Tests on a spring tour for the first time since 2005.

Australian players wore black armbands as a mark of respect following the death of Phillip Hughes, while Twickenham stood for a minute’s applause prior to kickoff to honour the late cricketer.

England led 13-3 at after an entertaining first half which featured some high-quality attacking rugby.

The Wallabies looked dangerous with the ball in hand but both sides blew early chances through poor execution.

Five-eighth George Ford, starting his second Test, put England up 6-3 with a long-range penalty after Ben McCalman’s late hit on Mike Brown as Australia came under increasing pressure up front.

The set-piece dominance led to the first try in the 28th minute after Israel Folau, who was otherwise impressive, fumbled a kick return near his own line and Morgan crashed over two phases after a charging scrum.

Australia’s persistence with running rugby paid dividends shortly after the break when Foley scored under the posts after an excellent one-two with winger Rob Horne.

It was to be Foley’s final contribution however, as he was subbed after converting his try and replaced by Quade Cooper.

Halfback Nick Phipps followed Foley off the bench soon after with Brumbies No.9 Nic White getting his first Test appearance on tour at a vital moment.

Just as Australia looked to have the momentum, their scrum woes resurfaced.

Cooper was caught in-goal and the Wallabies were powerless to stop England from five metres with Morgan crashing over for his second five-pointer.

The Wallabies hit back quickly with huge lock Skelton crashing over from close range just minutes after being subbed on.

Cheika tried to add another attacking spark in Kurtley Beale but England’s forwards stayed on top by using both brain and brawn.