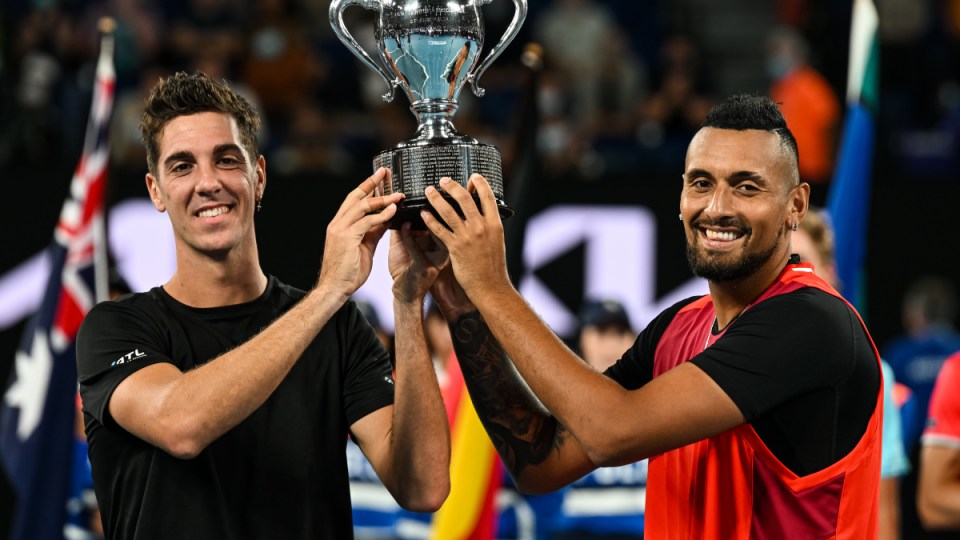 Nick Kyrgios and Thanasi Kokkinakis have ended an explosive Australian Open campaign on a high by winning their maiden grand slam title as a doubles pairing.

The victory was the first by a home pairing at Melbourne Park since the Woodies – Mark Woodforde and Todd Woodbridge in 1997 – and comes nine years after Kyrgios and Kokkinakis claimed the junior Wimbledon doubles title together.

Kokkinakis, who won his maiden ATP singles title in Adelaide earlier this month, was taken aback by his run of success after several years plagued by serious injuries and illness.

Kokkinakis told the crowd on Rod Laver Arena: “I can honestly say we did not expect to come close to this but with the help of you guys all week, who have been unbelievable, and the coverage and support we got, we couldn’t ask for anything more.

“It’s been a rough couple of years for me personally but what a month we’ve had,” he said.

“Coming into Aussie Open I was already happy and this was a crazy cherry on top.”

Kyrgios overcame a bout of COVID-19 a week out from the Open and reached the second round of the singles draw, where he was knocked out by top seed Daniil Medvedev.

The temperamental star allegedly had the trainer of Croatian opponent Mate Pavic threaten to fight him in the players’ gym after one doubles match and the man who calls himself ‘King’ was also labelled a “knob” by Kiwi opponent Michael Venus.

But it appeared mostly water off a duck’s back as Kyrgios continued his bid to change the face of tennis with his unique brand of showmanship.

“I haven’t had the greatest Aussie summer, I got COVID, but I don’t care about rankings or anything, at the end of the day this is a memory that I’m going to share with him (Kokkinakis) until I’m laying in the (ground),” Kyrgios said.

“I’m pretty pumped about it.”

The pair’s abrasive manner ultimately proved successful as they rode a wave of raucous support and knocked off seeded opponents in four of their five matches – including the top, third and sixth seeds – on their path to the final.

The atmosphere in the decider was far more friendly than Kyrgios and Kokkinakis had become accustomed to over the preceding fortnight.
And there was little of the controversy that has followed the Special Ks throughout tournament.

Down 3-5 and 0-15 in the second set, Purcell approached the chair umpire to complain about sections of the crowd calling out during his service motion.

Kyrgios called for the offenders to be removed, which they were by security guards.

But the brief halt to proceedings was a minor speedbump for Kyrgios and Kokkinakis as they waited until the next game to claim the championship on serve.