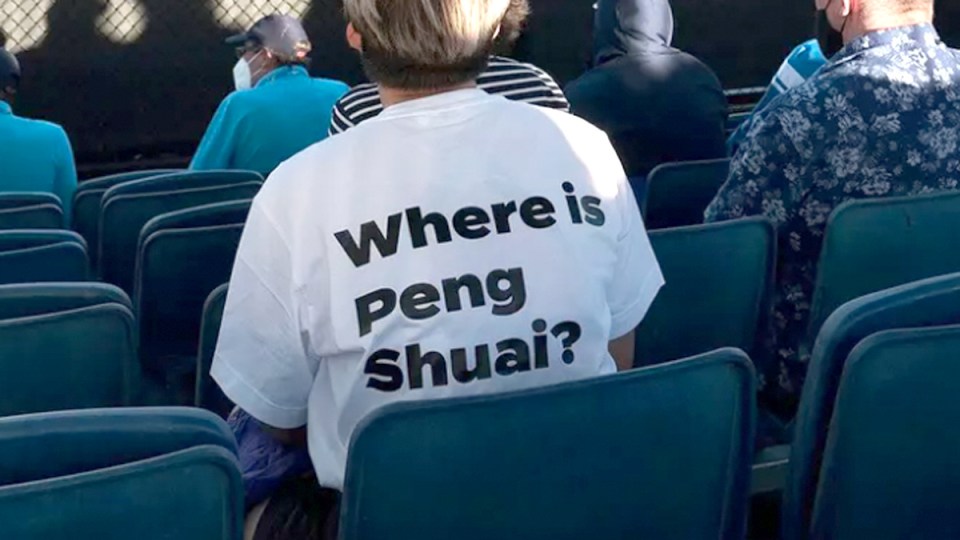 Tennis fans wearing these shirts were told to remove them at Melbourne Park at the weekend. Photo: Twitter

Tennis legend Martina Navratilova has blasted Australian Open organisers as “pathetic” after extraordinary scenes when officials removed banners and T-shirts emblazoned with the message ‘Where is Peng Shuai?’ from fans.

French tennis star Nicolas Mahut also called out Tennis Australia, accusing it of hypocrisy in an escalating row over support for the Chinese player.

Mahut, who was knocked out in the first round of the men’s doubles last week, and Navratilova, one of the game’s all-time greats, spoke out after footage emerged of security and police asking a fan at Melbourne Park at the weekend to remove a shirt carrying the message about Peng.

Mahut suggested on Twitter that organisers had bowed to corporate sponsorship from China.

“What’s going on!? What lack of courage! What if you did not have Chinese sponsors,” he wrote.

He included in his tweet #1573, referencing the logo of Chinese distillery Luzhou Laojiao. It has the naming rights to show court two at Melbourne Park.

Navratilova said Tennis Australia was wrong to strip the fans of the shirts.

“This is not a political statement, this is a human rights statement,” she said on the Tennis Channel.

“I think they (TA) are wrong on this. I just find it really weak.

“Just really capitulating on this issue from the Aussies, letting the Chinese really dictate what they do at their own slam for their own player, the player that has been there (Melbourne Park) before.”

Since then, some of the sport’s biggest names, including Naomi Osaka and Novak Djokovic, have voiced concerns for the 36-year-old Chinese star. The Women’s Tennis Association and the International Olympic Committee also pushed for more information about her whereabouts.

Peng not seen in public for three weeks. When she reappeared, she denied the accusations of abuse and said her social media post had been misunderstood.

The WTA, which remains concerned, has and said her reappearance did not address its worries about her wellbeing. Critics of the Chinese government have also continued with calls for more information on Peng.

On Sunday, Australian Open organisers defended their actions. Tennis Australia said it did not allow “clothing, banners or signs that are commercial or political” at the tournament.

“We continue to work with the WTA and [the] global tennis community to seek more clarity on her situation and will do everything we can to ensure her wellbeing.”

However, the move may backfire. After Sunday’s confrontation, fans set up a GoFundMe page to raise the money to print more T-shirts. Organiser Drew Pavlou, an activist and critic of the Chinese Communist Party, said they had reached their goal of $10,000 on Monday and every cent raised “will go towards the printing of these shirts”.

“We’re printing 1000 T-shirts and we can see how many match-goers that they can stop,” activist Max Mok told ABC Radio on Monday.

Mr Mok was one of the people removed from Melbourne Park on Sunday.