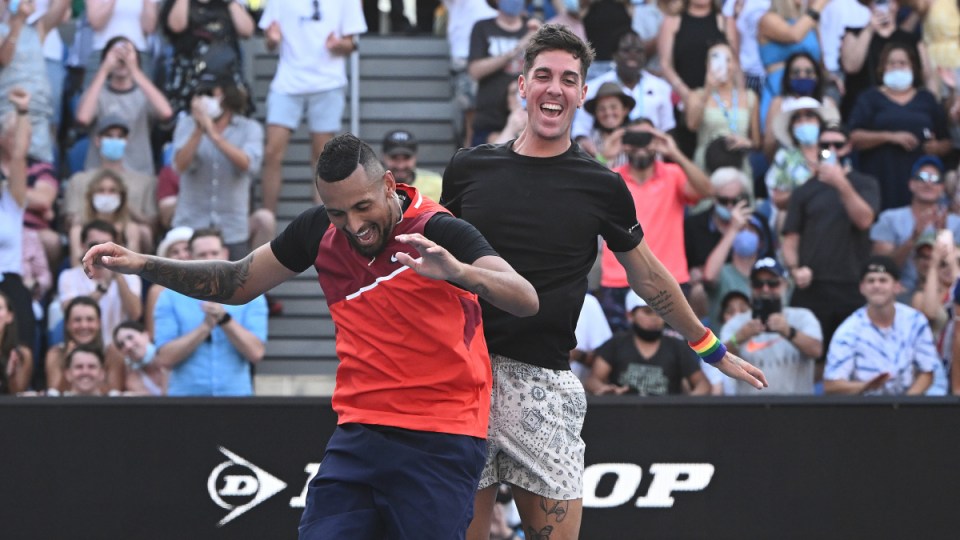 Thanasi Kokkinakis has lifted the lid on a fiery exchange with an opponent’s “salty” trainer after he and Nick Kyrgios dumped top seeds Mate Pavic and Nikola Mektic out of the Australian Open doubles.

The ‘Special Ks’ put on a typically energetic display on Friday as they upset the Croatian duo, whipping the Kia Arena crowd into a frenzy during the straight-sets win.

Local fans lapped up their antics but the Australian showmen seemingly riled Pavic’s trainer, who they say confronted them in the players’ gym after the match.

“He came up and smashed a foam roller against a pole as hard as he can,” Kokkinakis revealed on Sunday.

“He came up to Nick and said we were being disrespectful.

“Nick hit the opponent with a ball, but that’s normal. Doubles players have got unbelievable hands, so you have to go at them.

“They said we were showboating, but I’m sure if we played away in Croatia it would’ve been the same thing.

“It was just our energy and I think at the end of the day they were a bit salty they lost.

“They’ve won their fair share of tournaments so I thought they’d handle losing a little better than that.”

In his post-match press conference, Olympic doubles gold medallist Pavic said Australian crowds should “show some respect” to all players.

It came after world No.2 Daniil Medvedev expressed his frustration with local fans after he knocked Kyrgios out of the singles draw on Thursday night.

Kokkinakis and Kyrgios said they have no plans to dial down their on-court behaviour after the run-in with Pavic’s trainer.

“At the end of the day, we’re just trying to entertain the crowd,” Kokkinakis said.

“We didn’t mean anything disrespectful, we’re trying to get ourselves and our energy up.

“It was a little aggressive on his part though, for sure.”

Kyrgios, typically, had the last word on the matter, telling his vanquished rivals to “enjoy your flight home”.

The Australians will take on sixth seeds Tim Puetz and Michael Venus in the quarter-finals.