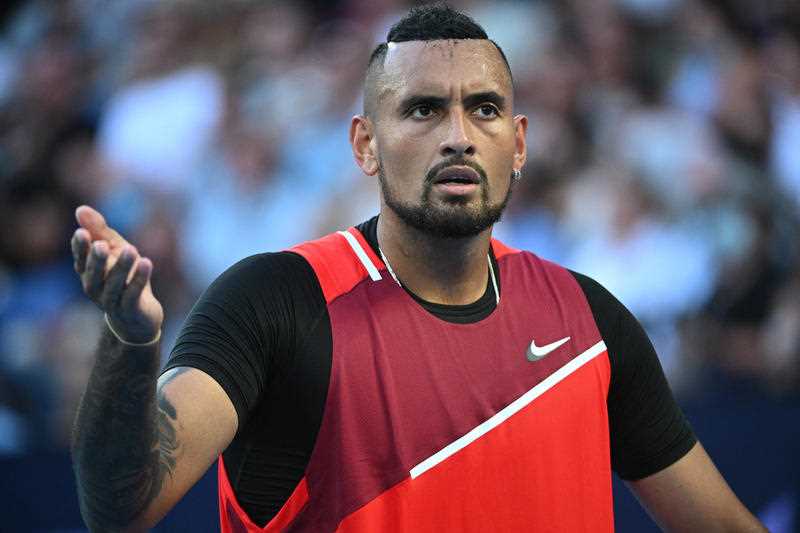 What happens next for Nick Kyrgios is a mystery even to the man himself. Photo: AAP

Enjoying the moment and not looking forward, Nick Kyrgios is unsure what the future holds after a second-round Australian Open exit left tennis’ most mercurial talent once again at a career crossroad.

As gallant and exhilarating as he was in a 7-6 (7-1) 6-4 4-6 6-2 loss to world No.2 Daniil Medvedev on Thursday night, Kyrgios faces another alarming rankings freefall.

The one-time world No.13 is projected to tumble to 124th in the rankings after the Open, leaving Kyrgios well outside the cut-off for direct entry to the season’s final three grand slams.

Dreading playing on clay, despite once beating Roger Federer on the slow red dirt, Kyrgios opted out of last year’s French Open before heading straight to the greener pastures of Wimbledon.

Still in the Open men’s doubles with Thanasi Kokkinakis, Kyrgios may be plotting the same path in 2022.

If he’s not, Kyrgios will need to raise his ranking, run the risk of trying to qualify or chase a wildcard into Roland Garros starting in May.

But none of these scenarios were on Kyrgios’s mind after he bowed out of the singles at Melbourne Park.

“I’m not looking forward at all. I’m going to enjoy tonight. I don’t plan things, I don’t really care what’s going on in a month’s time,” he said.

“We all know people can doubt me as much as they want but they know I’m going to turn up and show up for matches like this.

Kyrgios was playing only his second match in four months, yet still dazzled the crowd with breathtaking shot-making and wondrous tricks.

“No matter how little I train or how much I play, I’ll always lift for matches like this,” Kyrgios said.

“I’m not going to shy away from it. Obviously I’m not happy with drawing Daniil Medvedev second round because my ranking slipped.

“If I play 95 per cent of people tonight on that court I think I win, to be honest with you.

“But that’s just the way it is. I’m proud. I’m just proud of the way I carried myself. I fought. I gave a good show, and that’s it.

Kyrgios is at least planning to travel again, with the two-time grand slam quarter-finalist revealing the Dallas Open as his next tournament from February 7.

Then he’ll head to Delray Beach and Indian Wells for the year’s first Masters 1000 event.

Asked if there were any truth to rumours this could be his last season on tour, the 26-year-old said: “I don’t know what I’m going to be doing in a year’s time.

“I’m probably playing tennis but, as I said, I don’t know. Like, I don’t know. I’ll probably be planning to play, but I’m just thinking about tonight and tomorrow. Staying with my feet up.”