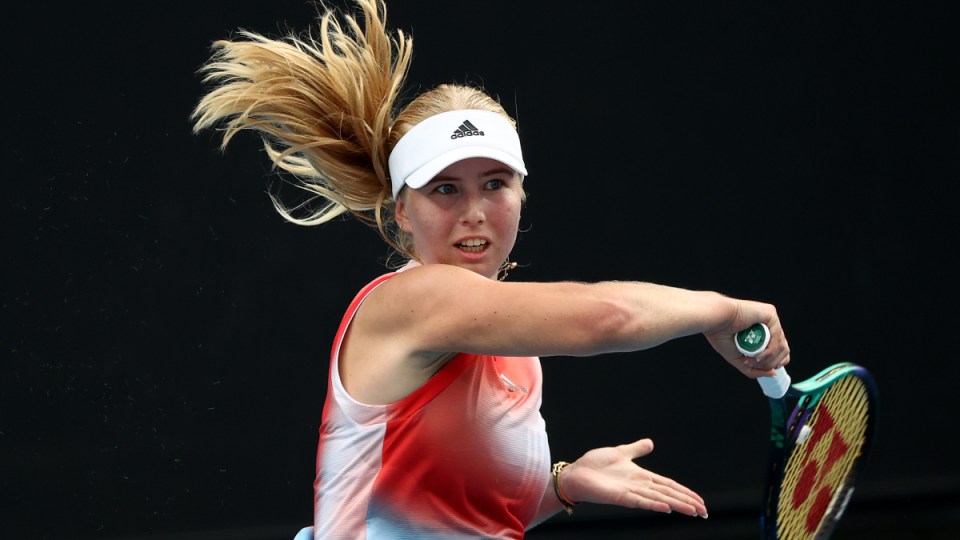 Rising Danish star Clara Tauson has powered into the third round of the Australian Open. Photo: Getty

Wide-eyed teenager Clara Tauson has delivered one of the shocks of the Australian Open with a stunning second-round defeat of in-form sixth seed Anett Kontaveit.

The junior champion at Melbourne Park three years ago, Tauson could barely believe it after sending Kontaveit packing with a 6-2 6-4 upset win on Thursday.

After gate-crashing the world’s top 10 for the first time, Kontaveit reached the semi-finals of last year’s season-ending championships in Mexico and opened 2022 with a run to the last four in Sydney last week.

But Tauson blew the Estonian off court to enhance the 19-year-old’s reputation as the new Great Dane of tennis following the retirement of 2019 Australian Open champion and former world No.1 Caroline Wozniacki.

“I didn’t really go into this match with a winning thought and I was just so happy to be here,” Tauson said.

“Anett has been playing well the last few months. I was just going in to see where my level was at and here I am.”

Next up for the world No.39 is American Danielle Collins on Saturday in a match Tauson wasn’t planning for.

“I don’t even know who I’m playing. I’m just going in happy and believing I can play this level of tennis all the time and we’ll see how it goes,” Tauson said.

While Kontaveit crashed out, Polish seventh seed Iga Swiatek progressed to the third round with a straight-sets victory over Rebecca Peterson.

Swiatek needed only an hour and 17 minutes to see off Swede Rebecca Peterson 6-2 6-2.

The 2020 French Open champion has dropped only seven games en route to the last 32.

“Grand slams are never easy so I wanted to start with a little confidence and these two matches have given me a lot,” Swiatek said.

“I’m finding my rhythm and I love it here.”