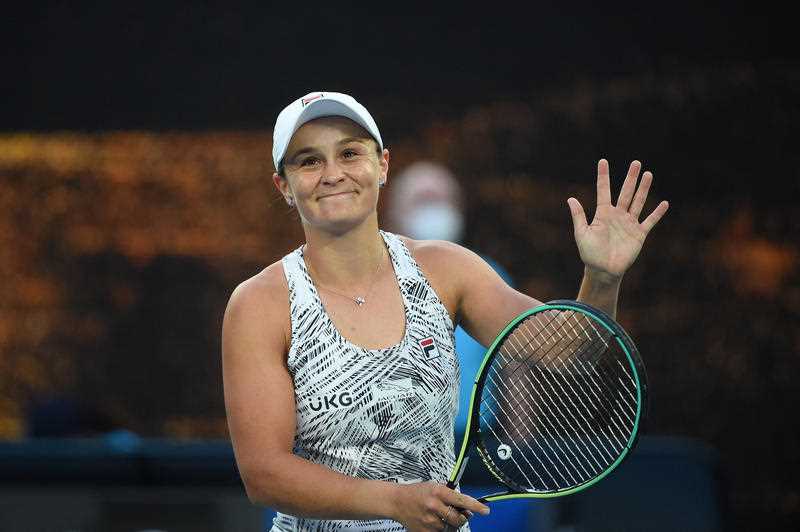 Eighteen Australians have taken to Melbourne Park over the past two days, all hungry for an Australian Open singles title.

With all first-round matches done and dusted, eight remain. Each has had a unique path to the second round – some withstanding close calls while others achieved stunning comebacks.

So, which Aussies are still in the running for a singles Open title, and who is most likely to take the chocolates?

Wimbledon champ Barty is one of three Aussies still in the running for a women’s singles title.

With two grand slam titles under her belt in addition to her world No.1 ranking, she’s the red hot favourite to win.

Barty dominated Ukranian Lesi Tsurenko in the first round 6-0 6-1 to book a second round contest with Italian Lucia Bronzetti on Wednesday afternoon.

It’s the first time the pair have faced-off, with onlookers hoping Barty will harness the confidence earned from her first round conquest to progress further at Melbourne Park.

Barty made it to Australian Open quarterfinals in 2021, only to be knocked out by Czech Carolina Muchova.

Fernandez notably made history alongside Brit Emma Raducanu when both teenagers made the final of the US Open in 2021.

Sam Stosur was bracing for her final singles game on Tuesday, after the 37-year-old announced this Australian Open would be her last as a singles player.

But the Aussie star shocked crowds, and perhaps herself, as she came back from one set down against American Robin Anderson to snatch a ticket to the second round.

It was the first time Stosur has come back from a set down to win at the Australian Open since 2003 against Conchita Martinez.

Stosur said she was “so happy” to have another singles game to look forward to – but her next contest will be no easy feat. She takes on 10th seed Anastasia Pavlyuchenkova on Thursday.

But with Stosur showing great form and having won the past two encounters with the Russian ace, both in 2018, she still stands a chance.

The 2022 Australian Open has already been filled with heartwarming wildcard victories – with Aleksander Vukic nabbing a round one victory against South African 30th seed Lloyd Harris 4-6 6-3 7-5 7(7)-6(3).

Vukic had the crowd of Show Court 3 on his side on Monday, with roars in support of the surprise Aussie star echoing across Melbourne Park.

The 25-year-old spoke about the electric atmosphere on Tuesday morning.

“[The crowd] probably won me the match,” he told the Nine Network.

“It was insane. I’d win a point and it’d feel like we’re winning a match.”

Vukic will surely be pleased to return to the venue for his round two clash on Wednesday afternoon with Moldovan qualifier Radu Albot.

Fan favourite Nick Kyrgios is also through to the second round, after beating American Liam Broady in straight sets on Tuesday night.

He has set up quite a clash with second seed Daniil Medvedev – and will be hoping the contest will be scheduled for the Aussie’s favourite John Cain Arena.

Despite Medvedev’s standing, Kyrgios has won the past two matches against the Russian ace – both in straight sets.

The Aussie will once again try to harness the power of the crowd in the tough contest, after a loud and boisterous match against Broady.

“I know I have the crowd in the palm of my hand,” he said post-match on Tuesday night.

Broady, who was jeered by the crowd as he walked out to play on John Cain Arena, was less impressed. He said he struggled to cope with the level of verbal abuse hurled at him by the crowd during the match.

“You get sledged from the sides like you can’t believe, [which] they don’t pick up on TV,” the British qualifier said.

“It was a very, very difficult atmosphere to try and handle, and he (Kyrgios) is incredible at getting them behind him and he plays better for it.

“People don’t really interact with the crowd like he does, and that’s one of his biggest strengths.”

Kyrgios conceded his round-two clash will be tough, saying he considers Medvedev to be “the best player in the world right now”.

“He does everything extremely well. He’s a hard worker, ticks all the boxes,” he said.

“To play it on John Cain would be – I’m just going to call it the ‘Kyrgios court’ – would be fun.”

John Millman’s 2021 Australian Open campaign was short-lived, succumbing to Frenchman Corentin Moutet in a five-set battle in the first round.

But his 2022 effort has started on a happier note, with Millman triumphing over Spaniard Feliciano Lopez three sets to one.

He will need to dig deep when he faces third-seed Alexander Zverev on Wednesday night.

Zverev has won both previous encounters with the Aussie.

Their paths last crossed in 2020, with Zverev sweeping with straight sets, snagging the first 6-0.

It will be difficult for Millman to eliminate Zverev, who is hungry for a grand slam title.

Despite being one of the toughest players on tour, Zverev is yet to secure a grand slam title of his own. He reached the Australian Open semifinals in 2020, and the quarterfinals in 2021.

In round two, he faces Polish Kamil Majchrzak, who blazed past Andreas Seppi in straight sets in their opening encounter.

The Aussie will be keen to get past the third round, having been knocked out before the fourth in his last two Australian Opens.

Christopher O’Connell entered the 2021 Australian Open as a wildcard, reaching the second round.

Hopefully he can maintain his strong form when he faces 13th seed Diego Schwartzman on Thursday.

Anthony Albanese to become next Prime Minister as Morrison concedes, resigns
A night with Nick: Let me entertain you
Today's Stories

Will an Australian take the Open? Meet the Aussies still standing after round one