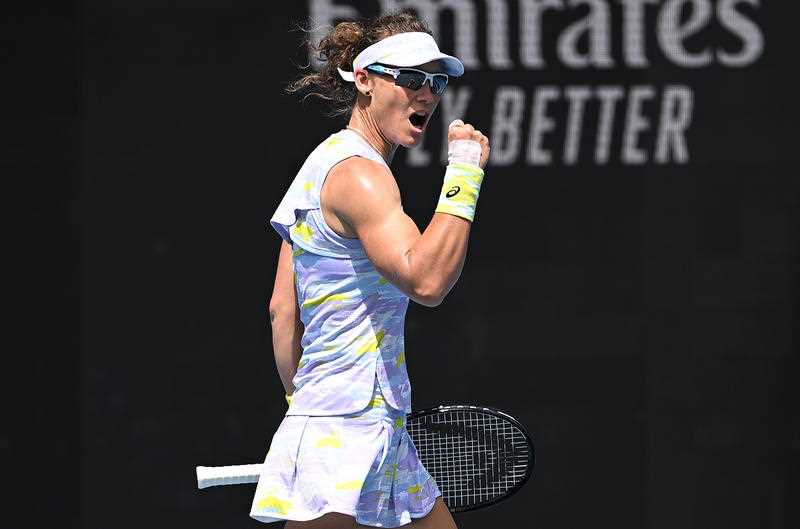 There have been amazing scenes in Melbourne as former world No.1 Samantha Stosur triumphed in an epic match to narrowly avoid a first round Australian Open exit.

The Aussie star, who said late last year that she would call time on her 20-year singles career after this year’s tournament, dug deep to defeat wildcard American Robin Anderson on Tuesday.

Nerves were high at KIA Arena, as were the stakes – with Anderson playing in a grand slam for the first time, and a loss for Stosur meaning her instant singles retirement.

Stosur had the advantage of the crowd on her side, with packed stands cheering her on at the close of every point.

Anderson was leaps and bounds ahead in the first game, before Stosur found some momentum at the net.

The set went to a tiebreaker, eventually going to Anderson.

At 5-3, the pair battled out a stiff advantage, Stosur roaring with delight as she finally locked in the second set.

The pair battled it out in the third period, with Stosur breaking Anderson’s serve to clutch the deciding set, winning 6-7 6-3 6-3.

It was the first time Stosur has come back from a set down to win at the Australian Open since 2003 against Conchita Martinez.

Stosur said it was a match she was going to “remember forever”.

“Probably one of the best singles matches I’ve played in a very long time and to do it at home today, I guess it wasn’t going to be the last,” she said.

The Aussie relished the chance to enjoy her time on court.

“It’s kind of been the focus all along since I knew this was gonna be my last event was play how I wanna play, go out and enjoy it,” she said.

“I probably couldn’t ask for much more.”

The 37-year-old, who won the US Open in 2011, announced in December this would be her last appearance in the singles in Melbourne.

“A huge thank you to @tennisaustralia for giving me this opportunity to finish my singles career at my home Grand Slam,” she wrote.

“I’m sure it’s going to be a mix of emotions but I wouldn’t want it any other way as I always thought I’d finish playing in Australia.”

Stosur has spent 20 years on tour, making her one of the veterans of the game.

Stosur said she was thrilled to have the opportunity to get back on court in Round 2.

“So happy to have another one,” she said.

It was a task to play through the nerves, she said.

“There’s always a few nerves but to be honest I think I was more nervous through December, deciding what I was going to do.”

Although she may soon be calling time on her singles career, the champ isn’t giving up on doubles.

She is competing in Melbourne with her Chinese partner Zhang Shuai. The pair are the No.4 seeds, and take on Japan’s Miyu Kato and American Sabrina Santamaria in the first round.

Stosur was one of 12 Aussies taking to the court on day two of the Open.

It was a heartbreaking straight-sets defeat for Saville, now ranked 426th in the world.

Inglis took the win at 6-4 6-2, and will play American Hailey Baptiste in the second round.

On Tuesday afternoon, Jordan Thompson was leading American Steve Johnson two sets to one, with the crowd rallying against the 27-year-old at Show Court 3.