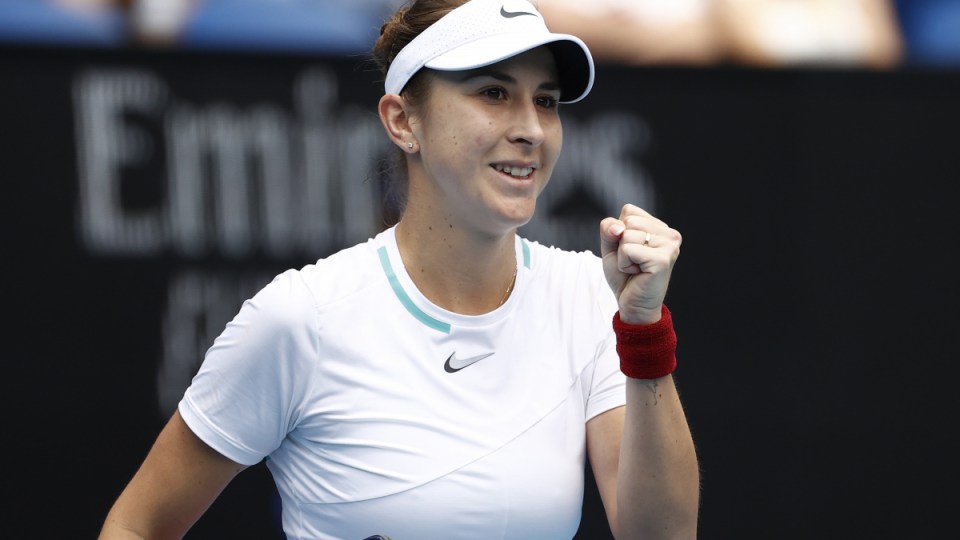 Belinda Bencic has eased into the second round of the Australian Open. Photo: Getty

Fifth seed Maria Sakkari and Olympic champion Belinda Bencic are the the first women’s big guns through to the Australian Open second round at Melbourne Park.

Sakkari was made to sweat against world No.287 Tatjana Maria before prevailing 6-4 7-6 (7-2) over the German on Monday.

Maria only gained entry to the season-opening grand slam on a special ranking after taking maternity leave last year following the birth of her second child.

But Sakkari, a semi-finalist at both the French Open and US Open last year, was mightily relieved to get past her.

“We all now first rounds are not that easy,” Sakkari said.

“Credit to Tatjana; she really played a great match. She has a very weird game in a good way. I found it really tough to find my rhythm against her.”

Sakkari, who crashed out in the first round in Melbourne last year before ending the season inside the top 10 for the first time, also admitted to being anxious playing the first match of the 2022 Open on Rod Laver Arena.

“I was a little bit stressed because I was opening up this tournament on this wonderful court. It’s a privilege,” the Greek ace said.

“I’m very glad that I was able to find a way to win and to keep myself in the tournament.”

Playing only her second event since contracting COVID-19 last month, Bencic showed no lingering effects in powering to a 6-4 6-3 victory over Kristina Mladenovic.

The one-time world No.3, seeded 22nd this year, opened her season with a run to the quarter-finals at last week’s Sydney Tennis Classic and also shapes as a potential title threat if she can negotiate her way through the first week.

Bencic will face American Amanda Anisimova next on Wednesday and looms as a potential fourth-round road block to top-seeded Ash Barty.

Defending champion Naomi Osaka is also in first-round action on day one against Colombian Camila Osorio.

Scott Morrison’s first-home buyers scheme will jack up prices, not build homes
Beneath the Djokovic saga, the Australian Open shapes up to be a classic
Today's Stories

Sakkari, Bencic into Open’s second round